Jakob Bosshart was, as he wrote, the son of “troubled but ambitious farmers”. He grew up on a lonely farm between the Töss and Glatt valleys in the Zürcher Unterland . After attending secondary school, he completed the teacher training seminar in Küsnacht from 1882 to 1885 and became a teacher in Germany for a short time. Years of study at the universities of Zurich, Heidelberg and Paris followed . He studied German and Romance languages ​​and received his doctorate in philology in 1887.

He then taught in England and at various secondary schools in the Canton of Zurich. In Winterthur he married the daughter of the later Federal Councilor Ludwig Forrer . From 1899 he headed and reformed the Zurich Cantonal School as rector for 16 years . In 1912 the seminar teacher in Küsnacht, Paul Suter, published a lecture about Bosshart in the teacher's newspaper .

In 1915 he had to be transferred to a sanatorium in the high valley of Clavadel near Davos due to advanced tuberculosis , where he died in 1924.

Book illustration by Ernst Ludwig Kirchner : Next to Heerstraße, 1923.

Bosshart wrote stories and a novel, whose heroes come from the country, like the author himself. He went against the materialistic zeitgeist. Of the planned trilogy, with which Bosshart wanted to settle accounts with his age and want to show young people a way into the future, Bosshart was only able to complete the novel A Caller in the Desert , which is considered his spiritual legacy. He tried to reconcile social and political differences within Swiss society before and during the First World War.

Works for children and young people 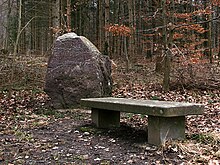