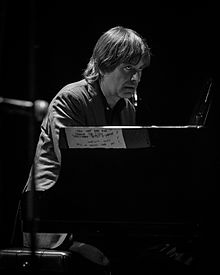 Jan Lundgren grew up in Ronneby , played in the formation “St. Thomas” before studying music in Malmö (1986–1991); During this time he worked in numerous Swedish jazz bands, such as Arne Domnérus , Putte Wickman , Bernt Rosengren and Georg Riedel , with whom he recorded the 2006 album Lockrop . In 1994 his first album was released under his own name, Conclusion , then Bird of Passage (1995), followed by the collaboration with the Peter Asplund Quartet in 1997 ( California Collection ). In 1995 he formed his own trio with Mattias Svensson and Matthias Hjort on bass and Morten Lund and Rasmus Kihlberg on drums. With his trio he won the Gyllene Skivan Prize in 1997 for the album Swedish Standards , on which Lundgren arranged old church hymns and Swedish folk songs. He played at Carnegie Hall in New York in 2000 .

Lundgren also recorded an album with Chuck Berghofer and Joe LaBarbera in California in 1996 ( Cookin 'at the Jazz Bakery ) and played in the USA with musicians such as Benny Golson , Johnny Griffin , Herb Geller , Bill Perkins and Conte Candoli . In 2005 he toured Sweden with Lee Konitz . In 2007 he recorded the album Mare Nostrum with Richard Galliano and Paolo Fresu for the ACT label and played at the JazzBaltica Festival. In the same year, ACT Lundgren's album Magnum Mysterium appeared , on which he reinterpreted Renaissance music with a chamber choir and Lars Danielsson . Lundgren also works with Nils Landgren and Magnus Lindgren and with the Nordic Vocal Ensemble . He also forms a duo with the pianist Carsten Dahl .

Jan Lundgren sees himself in the tradition of Swedish pianists from Jan Johansson to Bobo Stenson to Esbjörn Svensson . Lundgren incorporates influences from contemporary and classical music as well as the Scandinavian folk tradition into his jazz style.

In 2011 his album Mare Nostrum , which he recorded with Richard Galliano and Paolo Fresu , was awarded gold (Jazz Award) for 10,000 units sold in Germany. His solo album Man in the Fog (2013) was recognized by NDR as “Jazz CD of the Week”; he plays "an inner, yet enormously communicative music that draws from the rich sources of jazz tradition and European art and folk music and has found its own masterful form".