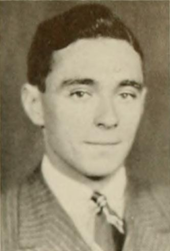 Bruner at Duke University in 1936

Jérôme Seymour Bruner (born October 1, 1915 in New York City , † June 5, 2016 there ) was an American psychologist with educational interests. He made important contributions to cognitive learning theory and was an initiator of the so-called cognitive turn in psychology.

Bruner was born in 1915 in a New York suburb, the youngest of four children of Polish immigrants. When he was 16, Bruner and friends bought a motorized racing boat that they tinkered with. In 1932 they won the race for Manhattan with it.

From the age of 18, Bruner studied psychology at Duke University . In 1937 he completed his studies there with a bachelor's degree and went to Harvard, where he received his doctorate four years later. During World War II , Bruner worked in the Psychological Warfare Division .

Following the book Process of Education (1960), he was appointed to the Educational Panel of the President's Science Advisory Committee under John F. Kennedy and Lyndon Johnson . Emphasizing that education does not consist in fact learning, he wrote in Process of Education that "knowing how something is put together is worth knowing thousands of facts about it". From 1964 to 1996 he tried to develop a complete curriculum for the education system.

At the age of 57, Bruner crossed the Atlantic in a sailing boat with his wife and a few friends in 1972. In an autobiographical essay from 1983 Bruner writes: "I think I had a good life ... psychology certainly helped with that - psychology as a way of asking questions, not as a source of wisdom".

Bruner taught psychology as a professor at Harvard (1952–1972), Oxford (1972–1980) and at the School of Law at New York University (since 1980). He co-founded the Center for Cognitive Research at Harvard and was also its director.

Together with Leo Postman he published the hypothesis theory of social perception , which focuses on the social determination of perception and interprets every perception process as an attempt to confirm an inner expectation or hypothesis. With a special device , the tachistroscope , they measured how quickly one recognizes (or understands) what one sees. While the test person looks into the machine, a picture appears on a cinema-like screen for a hundredth of a second. Postman and Bruner found that most people were quicker to spot things that they already knew and appreciated. This broke the dominance of behaviorism (stimulus - response) in the USA around 1950 and paved the way for the cognitive turnaround .

Bruner then introduced Jean Piaget's research to the USA. With his own studies in developmental psychology , he has presented groundbreaking and controversial theories on the development of thinking and speaking . In the 1960s he and his students carried out field research on Wolof children in Senegal and on Eskimos. He shows the importance of the social environment for learning , as Lev Vygotsky initiated.

Critics object that the case studies presented are too specific and, as such, cannot be generalized.

According to Bruner, people form concepts to simplify the environment and to find out how they should act in it. The concepts also serve to categorize the world, which simplifies it and thus makes it operational. As a result of this theory, Bruner explored different types of concepts as well as strategies of concept acquisition. Although its results are sometimes difficult to generalize for everyday life, they are still of systematic relevance.

Bruner advocates giving more weight to “ meaning ” as a central psychological concept. The construction of meaning - this means the question of how people develop meaning out of the jumble of physical sensory impressions - should be explored more intensively according to Bruner. Bruner also takes up the importance of the self in the context of culture in more recent writings. An explanation of the human condition cannot make sense "if it is not interpreted in the light of the symbolic world that forms the basis of human culture," writes Bruner in 1990.

Bruner's suggestion to arrange learning material in the form of a spiral curriculum has become known in school practice . But the modes of representation (enactive = acting, iconic = pictorial, symbolic = linguistic) can be traced back to him, the development of which he describes as addition in the growing toddler . In contrast to Piaget, learning is not tied to specific developmental and age levels, so that “ every child at every developmental level can be taught every subject in an intellectually honest way ”. (Frequently quoted, provocative sentence from the process of education , 3rd edition 1973, p. 44). His advocacy of discovery learning as a way of acquiring knowledge, which also opened the door to the project method, was effective . He is seen as the opponent of David Ausubel , who rates the performance of a teacher in the form of instructions and explanations (also as a teacher lecture ) higher. Bruner's learning theory has points of contact with a constructivist learning theory . Many critics consider his ideas to be too demanding for the learners in practice.