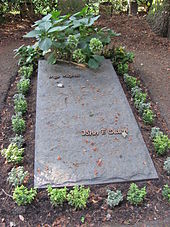 John Olden received acting lessons and then got an engagement at the Volkstheater in Vienna. He also worked as a cabaret artist . He emigrated to London in 1939 and took part in the Second World War as a British soldier . He then came to Germany in 1945 as a British theater officer , where he took part in the reconstruction of the destroyed Hamburg theaters. In 1949 he received a license for the production of feature films and founded "Sphinx-Film GmbH", which however only produced two films in 1949/50 ( Meine Niece Susanne and Cuba Cocktail ). After that, he initially worked as a radio director and producer for television programs, for example Maxim on trips or 1-0 for… Düsseldorf with Peter Frankenfeld .

From 1953 to 1965 he staged over 40 television plays for NDR , especially comedies and comedies. John Olden married actress Inge Meysel in 1956 . Since 1960 he has held the post of senior game director in the television company of the North German Broadcasting Corporation in Hamburg. He died of a heart attack in 1965 while filming The Gentlemen Pay Off. He rests next to his wife in the Ohlsdorf cemetery in Hamburg.

In 1966 he was posthumously awarded the Golden Camera for The Gentlemen Ask To Cashier, and his wife accepted the award at the Axel Springer publishing house in Berlin .