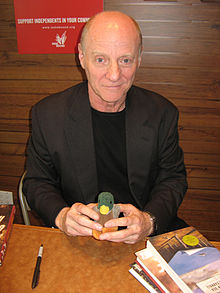 Jonathan Carroll was born into a family of artists: his father was the screenwriter Sidney Carroll (whose greatest success was Haie der Großstadt ), his mother an actress, singer and poet. He is a half-brother of the composer Steve Reich . After a youth that he himself experienced as "difficult", he graduated from Loomis School, Connecticut, and graduated from Rutgers University with honors in 1971 . In the same year he married the artist Beverly Schreiner. He later moved to Vienna and taught literature there at the American International School .

Since Stanislaw Lem's son also attended this school, Carroll came into contact with the Polish author and his agent at the time, Franz Rottensteiner , who was also the editor of the Fantastic Library at Suhrkamp Verlag . Convinced of the quality of the works, which initially received little attention in the USA, Rottensteiner brought them to the German market in quick succession, also inspired by the letters of enthusiastic readers such as Stephen King , Peter Straub , Michael Ende and Christopher Priest .

Carroll writes so-called fantastic literature . His stories begin in the present reality. The heroes of his books are people of the upper middle class, who at some point in their lives perform an act that at that point in time seems insignificant. It later turns out that they have not acted morally. A fictional world meets the known world, and the heroes experience situations as we know them from the horror genre. However, the focal points of the books are less the nightmarish scenes of horror than the inner state of the characters, their questions about “why” and “where”.

In Das Land des Lachens the reader accompanies the bored Thomas Abbey on his search for clues to find out everything about the writer Marshall France, whom he adores, in order to write the ultimate biography of the author. His research leads him to the town of Galen, where France lived and wrote. Galen is an idyllic place where there are strange things like talking dogs and people who seem straight out of Frances works; Gradually it turns out that the entire place sprang from the writer's imagination, and only when a bloody act is committed at the end, on the last page of the novel, does the reader get a hint as to how all of this is to be understood.

“Jonathan Carroll has extraordinary writing potential ... and has become a cult author. They are never the same, but similar stories that complement each other to form a mosaic, a Carroll cosmos. Stories - sometimes funny, mostly melancholy - of guilt, sex and death, with which he ultimately only wants to remind us of the 'other' side of things, of the consequences of our actions and of the fact that something always remains somewhere and is just waiting for it. trip us up. Sometimes, however, he tears our hearts out and doesn't give it back. "

- Sascha Mamczak on When the quiet ends

“Dry, sad, beautiful. If Carroll's novel FIEBERGLAS is as successful as it would be hoped for, one can hope that (...) the even nicer successor DAS HÖLZERNE SEER (The Wooden Sea) will soon be available in German. ""

"(...) Truth is a mobile army of metaphors, says Nietzsche - add a few more lively verbs, so let the" king cholesterol "" coo "in the pub or another suspicious interlocutor" chuckle dirty " , put on the whole driest melancholy with subliminal necrophilic Viennese humiliation - "A fine guest - you invite him and he falls dead", and already has the whole Carroll style. (...) This is how German readers finally become experience that since Kurt Vonnegut's Billy Pilgrim no hero of literature has fallen strangely and sadly from his time than Carroll's small town policeman Francis / Frannie McCabe. "