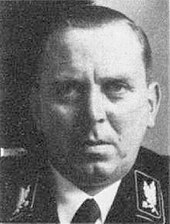 Schaub was a son of Julius Schaub and his wife Margarethe, b. Ludwig. He attended elementary school, then a drug school and a private trade school in Munich. He then worked for the trading company of German pharmacists. In 1917, during the First World War , Schaub was drafted as a nurse for military service. In a serious fall, he injured both legs and was subsequently dismissed from active service in 1918.

He joined the NSDAP on October 10, 1920 ( membership number 81 on re-entry in 1925). In 1923 he took part in the Hitler-Ludendorff putsch . Arrested on the border near Salzburg after fleeing to Carinthia, he was first sentenced in May 1924 by the Munich People's Court to one year and three months imprisonment. Later he received the blood medal that Hitler distributed to the "veterans" of the putsch. After 1924 he also became a member of the SS (SS No. 7), in which he rose to SS-Obergruppenführer until 1943 .

Employed privately by Hitler as a personal assistant on January 1, 1925, Schaub was constantly close to him until 1945. From October 18, 1940, Schaub took the place of the previous Chief Adjudant Wilhelm Brückner , who was unexpectedly dismissed because of a dispute with Hitler's house manager Arthur Kannenberg . The good relationship with his boss was demonstrated by Hitler's participation as best man at Schaub's second wedding.

Schaub belonged to the National Socialist Reichstag in the third and fourth electoral terms . On November 9, 1938, Schaub and Hitler's raiding party initiated the persecution of the Jews during the Reichspogromnacht in Munich, when they destroyed Jewish shops, set fire to Ohel Jakob's old synagogue and, according to Goebbels ' notes, “did terrible work”.

On April 23, 1945, after Hitler had finally realized that the war was lost, he ordered Schaub to burn all of his personal documents from the Reich Chancellery and the Führerbunker in the garden of the Reich Chancellery. Then he released Schaub from his surroundings in the Führerbunker and sent him from Berlin to southern Germany, where he was supposed to destroy his other personal documents. For this purpose, Schaub went to Hitler's private apartment on Munich's Prinzregentenplatz and the Berghof on Obersalzberg and burned all tangible documents from Hitler's private vaults. Then he drove to Zell am See and Mallnitz and blew up the special driver train .

At the time of the German surrender , Schaub was arrested by the US Counter Intelligence Corps (36th CIC Det.) On May 8, 1945 in Kitzbühel with forged identity papers, made out to be "Josef Huber", and held in various internment camps until February 17, 1949 . Since neither the American military courts nor the German denazification authorities were aware of Schaub's involvement in crimes from 1933 to 1945 - Schaub's involvement in the crimes of the Reichspogromnacht, for example, only became known after 2000 - he was only approved by the Spruchkammer classified as " followers ". Schaub was rated as a "better valet" without any decision-making power of his own.

In 1953 Schaub was briefly in public again with Hitler's photographer Heinrich Hoffmann . Both testified as witnesses in a court case in Munich. It was about personal items belonging to Adolf Hitler, some of which Hitler's Munich housekeeper Anni Winter had illegally appropriated. Schaub most recently worked as a chemist in Munich.

In his first marriage, Schaub was married to Gertrud Hempel since 1921. Schaub's first marriage was divorced on May 20, 1925 before the II civil chamber of the Munich District Court I because of adultery. The court found that his wife was at fault because she had entered into an extramarital relationship with the master boxer Edmund Schneider - a fellow prisoner of her husband in Landsberg in the summer of 1924 - in 1924. As early as April 1923, the party leadership of the NSDAP had received a letter of denunciation against Schaub's wife, in which she was accused of prostitution.