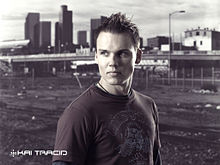 Kai Tracid , real name Kai Franz , also known under the pseudonym Kai Mac Donald , (born January 17, 1972 in Frankfurt am Main ) is a German music producer and DJ . His productions range between trance and acid music , from which his artist name is derived, which is a mixture of both names.

Tracid started working as a DJ in the late 1980s. He initially played hip-hop , but friends soon brought him into contact with the then still young techno movement. A little later he sold his DJ equipment and began his first steps as a music producer.

His first publications appeared in 1995 under the pseudonyms Acut Genius , Formic Acid , Mac Acid and WOW. In the same year he founded the A * S * Y * S project with Frank Ellrich . In addition, he made remixes for well-known Eurodance projects such as La Bouche , Culture Beat and No Mercy .

The first record under the name Kai Tracid was called “So Simple” and was released in 1996. However, he only recorded his first commercial success the following year with the single “Your Own Reality”, which made it to number 22 in the German single charts . As part of its success, Tracid also resumed his DJ work. In 1998 the singles "Dance For Eternity" and "Liquid Skies" were released, which were as successful as "Your Own Reality". In the same year Tracid was nominated for the VIVA Comet . He also founded the record label Tracid Traxxx that served in the following years as a musical home for its numerous projects and quickly became a style-defining Hard Trance - Label developed. Tracid's first album "Skywalker 1999" was released in 1999.

He celebrated his greatest successes in the following years with singles like "Too Many Times" and "Life Is Too Short" (both 2001). The latter is based on the melody of "Flight on the Lucky Dragon" by Klaus Doldinger , which appeared on the soundtrack of the film The Neverending Story . "Life Is Too Short" was Tracid's first top 10 hit in the German single charts.

In 2002 his second album "Trance & Acid" was released. At the end of the year the single "4 Just 1 Day" was released, followed in 2003 by the album "Contemplate (The Reason You Exist)". In contrast to the single, the album could not build on earlier successes.

Tracid now devoted himself to other projects such as the Tracid Traxxx sub-label “Acid Files”, on which he published acid productions together with Rob Acid , Mijk van Dijk and Ramon Zenker and then withdrew from the public.

In December 2006 he announced a musical change and another album with the title "Immortal - Studioworx 2003-2006", stepped out of the A * S * Y * S project and initially closed his Tracid Traxxx label, a short time later as a minimal techno label. Two singles followed, but they largely went unnoticed by the general public.

The announced album has not been released to this day, which, according to Tracid, is due to a lack of innovations in the field of dance music and a private lifestyle.

The Tracid Traxxx label has meanwhile been dissolved. The music rights were completely assigned to the respective artists.

In 2011, Kai Tracid's live sets could be seen at Nature One and the Global Gathering Festival in Poland.

In 2013 he announced in an interview a restart of the label in the old style. Corresponding plans are already in place.

In addition to the publications under the name Kai Tracid, Tracid has also produced under numerous other synonyms and has worked with artists such as ATB (as Farrago ), Thomas P. Heckmann (as Arrakis ) and Frank Ellrich (as A * S * Y * S ). He was also part of the Der Verfall project and until 2004 produced Warmduscher's publications .

Projects with other musicians