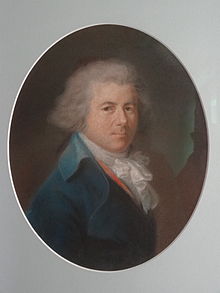 Karl Wilhelm Jerusalem (born March 21, 1747 in Wolfenbüttel , † October 30, 1772 in Wetzlar ) was a German lawyer. Through his suicide he became the model for the tragic end of Goethe's Werther .

The original of the ticket with which Jerusalem requested Kestner's travel pistols is preserved in the Goethe and Schiller Archives in Weimar. 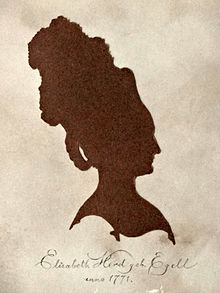 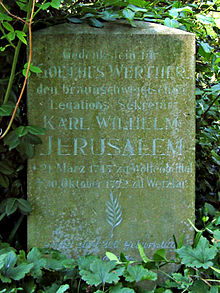 During his studies in Leipzig he got to know Goethe , but he didn't like him. After that he was in the service of the Braunschweig branch as the secretary of the embassy . He studied litigation at the Reich Chamber of Commerce in Wetzlar . There he met Goethe and Johann Christian Kestner again.

Because of his middle-class status he was not adequately respected by the nobility, had clashes with his superiors and - like Goethe in his Frankfurt law firm - found no satisfaction in his work. The unhappy love for the already awarded Elisabeth Herd (née Egell, 1741–1813), wife of a legation secretary from the Electoral Palatinate , broke his heart.

He shot himself on October 29, 1772 in his apartment at Schillerplatz 5 in Wetzlar and died the following day. Lessing's tragedy Emilia Galotti lay open on the table . The apartment is now a memorial ( Jerusalem house ). Goethe processed this event in the tragic outcome of his novel The Sorrows of Young Werther .

"... tormented by unsatisfied passions, by no means stimulated from outside to take significant actions, with the only prospect of having to hold out in a sluggish, mindless bourgeois life, one made friends in displeased arrogance with the thought that life, if it was one no longer waiting to be able to leave at your own discretion. "

- Johann Wolfgang von Goethe : From my life. Poetry and truth

After the publication of “Werther”, Lessing published Jerusalem's “Philosophical Essays” with a polemical preface and sharp comments as a protest against the representation of Goethe. Lessing was particularly annoyed to see his deceased friend portrayed by Goethe as a “sensitive fool” while he valued Jerusalem as a “true, thoughtful philosopher”. Significantly, one of Jerusalem's philosophical essays was a defense of suicide.