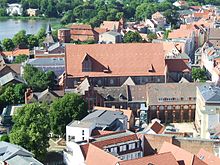 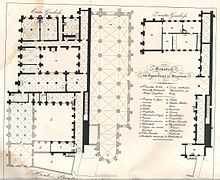 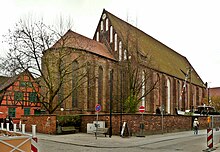 Hall of the former Katharinenkirche (east side) 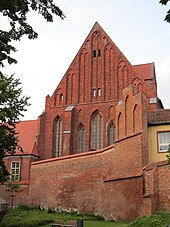 West side of the former Katharinenkirche behind the city wall

In the course of the Reformation , the monastery was dissolved. The buildings became the property of the city and have been used for various profane uses ever since. The postal address is Mönchstraße 25-27. The porter's house at Katharinenberg No. 14 belongs to the monastery . Today the buildings belong to the German Sea Museum and the Stralsund Museum .

The monastery was founded in the 13th century by monks of the Dominican order at the instigation of Prince Jaromar II . The first documented mention of the monastery dates back to the year 1251st According to a document dated October 31, 1261 Prince had Witzlaw II. The place for it given .

Initially, this building, the completion of which is documented in 1317, consisted of the Katharinenkirche , an approximately 70-meter-long three-aisled hall church . The chapter house with vault paintings from the 15th century, which was created as part of the renovations and extensions in the 14th and 15th centuries, should be emphasized . The Katharinenkloster was soon held in high esteem, with the result that important Dominican religious assemblies were held in Stralsund from the 14th to the beginning of the 16th century.

In the course of the Reformation in 1525, the Hanseatic city of Stralsund became the owner of the Katharinenkloster and the monastery as such ceased to exist.

After renovations, the monastery buildings were used for other purposes. In 1560, pupils and teachers of the Sundisches Gymnasium, which was newly founded from three church schools, moved into the western part of the building, and an orphanage was set up in the eastern part . The monastery church was used by the Swedes as an arsenal from 1678 , also as the armory of the Swedish General Government , and later also by the Prussians (from 1815). In 1902 the monastery church was also sold to the city of Stralsund.

After the orphanage moved out of the monastery in 1919, the entire building was extensively restored between 1919 and 1924 . After that, the Neuvorpommersche Museum of local antiquities and art objects , led by Rudolf Baier , moved in , which until then had been housed in the Stralsund town hall and in rooms on Badenstrasse . This municipal museum was the predecessor of today's cultural history museum . In 1933, the high school served as the backdrop for the youth film Mature Youth .

The premises of the former monastery were used as a grammar school until 1945. Students at this grammar school were, for example, Ernst Moritz Arndt and the later museum director Rudolf Baier.

At the beginning of the 1950s, the newly founded Nature Museum also moved here. This museum was in turn expanded as a museum of oceanography and fishing. It is the predecessor of today's German Maritime Museum .

Today the two most important museums of the city of Stralsund are housed in the premises of the former Katharinenkloster. The Stralsund Cultural History Museum is located in the former cloister building of the monastery and the main seat of the Sea Museum is in the hall church.

The building is located in the core area of ​​the city ​​area recognized by UNESCO as a world cultural heritage site as part of the “ Historic Old Towns Stralsund and Wismar ”. It is entered in the list of architectural monuments in Stralsund together with the Katharinenkirche and the gatehouse Katharinenberg 14 with the number 394.