The metal decorative fittings of a Bronze Age folding stool , which were found in 1899 during the excavation of a barrow near Daensen , a district of the Lower Saxon town of Buxtehude , are known as the folding stool by Daensen . The folding stool by Daensen is the southernmost and most richly decorated example of the 18 remains of folding stools from the Nordic Bronze Age found so far . The fittings and an attempt to reconstruct the stool true to the original are in the permanent archaeological exhibition of the Hamburg Archaeological Museum in Hamburg-Harburg .

The reconstructed grave mound Backelsberg from the south

The site is located about 300 m northwest of the center of Daensen on an open field belonging to the then farmer and community leader Eickhoff. The grave mound called Backelsberg or Baaksberg was elevated near a slight hilltop, was visible from afar and originally had a diameter of 20 m. According to a local legend , the Chauken prince Baak or Back is said to be buried in the burial mound . By 1897 the burial mound at the northern end was half excavated for sand extraction. In the middle of the hill, Eickhoff's servants came across a roughly 120 cm high rectangular stone packing made of field stones. Inside the stone pack, they found burned bones and a complete human skull with two healthy molars . The workers threw the skull to a dog who abducted it. The Moisburger pastor Wittkopf was against the work and recorded his observations in the parish economic book:

“This mound was half removed from the northern end by 1879 and an oblong of large, uncut granite stones was discovered in it, containing nothing special. Further in the middle is a heap of medium-sized field stones, about 4 feet high, sloping flat to the side and lying on top of the remains of unburned human bones, a complete skull, with z. B. two perfectly healthy molars and some other bone fragments that were not destroyed by fire but by age. The skull lay in the west and from it to the east was a line of gray, ash-colored earth, without any epithets, and all of this covered with earth for another 3 or 4 feet. NB! The Germanic Chaukenheros Back is buried here. The farmer Eickhoff's servants have desecrated his resting place and thrown his skull to a dog that kidnapped him. Sic transit gloria mundi ! " 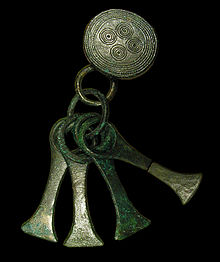 The remains of the folding stool consist of four bronze knobs 36–40 mm in diameter with a 15 mm long socket and a total length of 23 mm. The end caps are ribbed and show a pattern of four concentric circles on the front. In a cast loop with a diameter of 29 mm, four rattle plates with a length of 73 mm are suspended from a ring with a 28 mm diameter. These fittings are assigned to the frame on the seat. Two other small knobs with diameters of 27–29 mm and lengths of 18 mm belonged to the foot rails of the stool. Most likely four of these knobs were originally attached to the stool, two of which have been lost. Furthermore, there are four decorative nails made of bronze, the stepped heads of which are covered with a sheet of gold . The nail heads are 18 mm wide and have a pin length of 27 mm. Three bronze 8-shaped fittings 41 mm long, 15 mm wide and 2 mm thick with a line decoration carry a gold sheet inlay at the waist. The gold sheet was passed through two fine incisions in the fitting to the back and bent there. Two rectangular bronze fitting plates 38 mm long, 7 mm wide and 1.8 mm thick are completely covered with sheet gold on the front side and bent around the edges towards Hingen. In addition, there are five rectangular fitting panels, but their broken edges do not fit together, so that further fitting fragments may be missing. A piece of leather and seven to eight pieces of wood have been preserved of organic materials , one made of ash wood , the rest of maple . Under the wooden parts there is a corner piece and one with the attachment of the seat leather. The fittings of the stool were typologically dated to around 1400 BC based on comparative finds .

The metal objects found could be identified as fittings of a folding stool, as several folding stools from Bronze Age burial mounds and tree coffin burials were found in Denmark , Sweden , Schleswig-Holstein and Mecklenburg in recent years . These numerous comparative finds , as well as the folding stool by Guldhøj found in 1891 near Vamdrup in the Danish municipality of Ribe with its completely preserved wooden structure, enabled an attempt to reconstruct the folding stool from Daensen.

Improper recovery without precise documentation of the context of the find makes it difficult to make more precise statements about the entire complex of finds. The folding stool by Daensen is the most splendidly decorated folding stool of the Nordic Bronze Age. There are 17 other comparative finds of this type of stool or fittings. The remains of two folding stools came from depot finds , all the rest were grave goods from tree coffins or burial mounds. Where the sex of the deceased could be determined, the folding stools were added to the male deceased. For this reason, it is likely that the Daensen folding stool was also given to a deceased man. Up until now, folding stools have been found in extremely affluent burials. It is possible that the buried person in Daensen was also a higher-ranking personality, possibly a prince or chief , in his social environment. The lack of other grave goods may indicate an ancient robbery of the grave, as comparable graves equipped with stools always contained additional objects such as weapons , jewelry and household items. The ribbed bronze bracelet delivered by Bauer Eickhoff, however, must have come from a women's burial, as comparative finds suggest. Either there was a double burial here, or the bracelet came from a separate women's burial that was subsequently created in the same burial mound. Further parallels of such folding stools come from ancient Egypt , the best-known example of which from the tomb of Pharaoh Tutenchamun around 1330 BC. BC.