A knitting team in preparation, while the individual players wait for their turn.

The Knittel throwing or Stöbelwerfen is a team sport similar to curling . Instead of an ice stick, a wooden club (a "Knittel" ) is used to throw it in the direction of the "stave" .

It is an old popular sport (according to tradition, lumberjacks in the Salzkammergut used to throw knuckles as a leisure activity 100 years ago) and historically it is part of the tradition . The choice of the name of this sport depends on the location. In most areas, the sport is known more as "Knittelwerfen" , in some more as "Stöbeln" .

This sport is known in the southern Traunviertel and northern Salzkammergut . It is particularly widespread in Gmunden (after the war there was a Knittelbahn in many inns; in May 1958 the GKC (Gmundner Knittel Club) was founded at the GH-Marienbrücke), Ebensee -Offensee, Pettenbach , Vorchdorf , Eberstalzell , Wimsbach , Kirchham , Roitham am Traunfall and Ohlsdorf .

The Knittel is a wooden club or a wooden club with a conical shape. He is shot in the direction of a wooden cube about 17 m away, the stave (more rarely also "hare" ). It is counted as in stick shooting . The aim of the game is to bring your team's " knitting " closer to the stave than your opponent's.

This game, which is usually played next to inns , is often noisy. Since the third dimension makes knock-throwing more difficult than stick shooting, the games regularly come out unexpectedly.

It is usually played once a week from April to September or October. The appointment is often made on a weekday, often Wednesday or Thursday, at a certain time.

It is also not mandatory for the players to appear regularly. This is also not a problem in that the "zoamschießen" means that the teams are composed differently every time.

The first knitting of a year on a knitting track is called "throwing" . Depending on the weather and temperature, this takes place in April or May. The last Knittel toss, usually in September or October, is called the "throwing" .

For players who do not shoot as often, it can be difficult to tell the difference between their own team and the opposing team. In contrast to ice stock sport, in which a team puts a paper or rubber ring over the ice sticks, there is usually no such help with knittel throwing. Often, the Knittel are designed individually to a certain extent, for example with lettering or colors, in order to improve the differentiation.

The rules of the game

During the game. Looking towards the "Moar" .

The rules of the game largely correspond to the ice stock sport in southern Upper Austria .

A team (the "Moarschaft" ) usually consists of at least three people. If shooting is only for entertainment, practically anyone can play, so the team can insist on six or eight players. In a tournament there are only four people per team.

Before the start, it is agreed how many rounds will be played. Mostly it is thrown on 5 or 9, or simply on three won rounds. Furthermore, the game win is negotiated. Often you play for small change like 50 cents per round or for drinks or food like the " Bratl " .

The player does not necessarily have to shoot away from the middle of the lane, but can also, depending on the situation, dodge to the side. At the tournament, the permitted lateral distance is only about one to 1½ meters, depending on the agreement.

This is followed by shooting ("zoamschiassn") and determining the teams. The players stand together in a circle at a distance of about two meters from the stave and each one holds his knittel with the "spitz" in front of him or across his head. On command, one or more players call "1-2-3" and on three each player throws his knot as close as possible to the stave. Half of the players who are closest to the stave (the "narrow" ) form team A and the rest (the "wide" ) form team B. In a tournament, there is no shooting together because a "Moarschaft" plays together .

For each newly determined team, the players talk to each other about who is the leader or instructor (the "Moar" ). The team's most experienced or best knit thrower who understands the game and can read it and can distinguish well between the knits of his own team and those of the opponent is usually chosen as “Moar” . It is helpful if the "Moar" has a rolling meter ready for tight results.

The "Moar" of the "Engen" throws first and tries to shoot a "Maß" . This means that the Knittel should come to a stop as close as possible to the stave. Ideally, the knittel rolls sideways and comes to a stop in front of the stave, and the stave is covered in the process. Then the "Moar" of the opposing team shoots . Both then go next to the track to their thrown knuckle. You then instruct the following players on your own team. This is also necessary because the player would find it difficult to estimate the distances due to the distance to the other stave.

It is then the turn of the team whose next knuckle is not the closest to the stave to shoot. Sometimes it is also necessary to measure the distances with a roll meter , folding rule or simply with another knife. When all players have thrown their knuckles, they count.

Exception: If only players from the leading team are left and are already "out" , the remaining players no longer have to shoot and the round is over. If the game is precarious (i.e. if the knuckles are in such a way that the following player could easily worsen the situation of their own team) and if only people from the leading team are left, they no longer need to shoot.

After the rounds are over and winners and losers have been determined, you usually play a rematch or throw together again.

The role of the "moor"

Here you can see 3 jackets from team A and 2 from team B. The next Knittel are two from Team A, the third next from Team B. Therefore , Team A "has" twice.

Usually there are several strategies, mostly arranged by the “Moar” , to improve the game situation for their own team. Whether the player can implement this is often not so easy and depends more on the experience, skill and luck of the thrower. As an aid, the “Moar” can also go to the point where the Knittel should stop.

The instructions from the "Moar" are typically:

The comments of the "Moars" , apart from praise or criticism, can be:

Play media file
A player throws the knuckle with a twisting motion towards the stave.

The Knittel thrower grabs the Knittel a little under the handle, takes it out and throws the Knittel with a twisting movement in the direction of the stave. The player tries to throw the knitting so that it comes as close as possible to the stave.

The difficulty with beginners and the art lies in mastering the turning of the knot. If it hits with the point, it “crumbles” (jumps) and usually stops somewhere, usually not where you would like it. If he hits the "Oarsch" (whereby the Knittel usually completes half a turn during the shot), then it comes to a standstill faster than if he forwards the Knittel track with the "Spitz" (Knittel makes a full turn). The wrinkles often stay crossed or on top of each other.

This means that further movement on the ground depends crucially on the landing, or the so-called right or left twist throw is already controlled by the hand during the throw, and should therefore influence the landing of the Knittel. With lighter knittels you often shoot with one and a half or two turns. It also depends on the preferences of the player and the game situation, how one wants to shoot the Knittel. 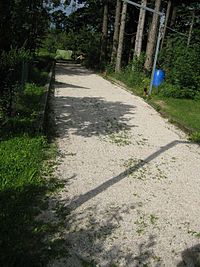 A typical Knittelbahn covered with sand. On the right you can see the rain barrel and the lighting mast.

The playing surface essentially corresponds to that of ice stock sport. Therefore, a Knittelbahn is often used as a curling rink in winter and vice versa. The ground is usually covered with sand or gravel , the playing area is bordered by square wooden posts. It is also less common to play in a meadow. The length of the track is about 25 to 40 meters and the width about 3 meters.

Usually, before the game and now and then in between, the sand is redistributed and smoothed with an iron rake or other device in order to mend damage caused by cracks. Often the track is illuminated by two lights that are attached to a mast so that you can still play after dusk. There is often a rain barrel available to moisten the point so that the ring holds better.

The staves are usually 17 m apart. This established, common measure can be shorter or longer depending on the length of the Knittelbahn. In the past, the distance between the staves was generally smaller. Wooden pegs are often driven in to the left and right of the Knittelbahn to mark the height of the stave and the throwing position of the players.

The Knittel and the Stave

The Knittel. On the left is the "Oarsch" or the "broadside" , on the right is the "Spitz" with the metal ring.

There are specialized carpenters or individuals who make knitters. Usually it has eight corners on the "Oarsch" , more rarely it is completely round, but turns into a round shape towards the ring. A ring made of iron or aluminum is attached to the rounded, tapered "point" in order to protect it and protect it from damage or splintering. However, sometimes (different from region to region) there is a requirement to use knittel without a ring in order not to damage other knittel. The rear, broad part is called "Oarsch" , more rarely simply "the broadside" .

Hornbeam (white beech) or "Rüsta" (brown ash ), ash or oak are recommended as wood for the Knittel . In any case, it should be hardwood . The length and weight of a knuckle can vary and is often different from region to region. For example, shorter rolls are used in Ebensee . But the height of the player also plays a role in the choice.

The stave is a wooden cube with an edge length of around ten centimeters and has 45 ° facets (beveled surfaces) on the edges so that it can roll a little better.