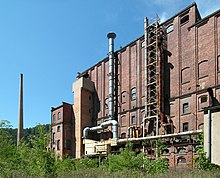 Kohlmühle is the smallest district of Hohnstein in the Saxon Switzerland-Eastern Ore Mountains district in the village of Goßdorf , to which the Waitzdorf district also belongs.

The district is located in the extreme south of the Goßdorf district , in the Sebnitztal . There is also the lowest point of the Goßdorf corridor with 148 meters. The huge building of the Kohlmühle linoleum plant is characteristic of the place . Due to its brick construction, it is a listed building. Due to the bankruptcy of the company, it was auctioned and sold on May 31, 2016. However, due to numerous damage and contamination, the buyers themselves have considerable doubts about a quick and comprehensive renovation.

The cabbage mill itself was built more than 200 years ago. Before that, until 1756, a mill building had stood at the mouth of the Kohlichtgraben. More than 100 years ago, the Kohlmühle was a popular excursion destination for Bad Schandau spa guests as the end point of hikes in the Sebnitz Valley. At that time, the mill was on the edge of a wide meadow, the "Hankewiesen".

With the opening of the Neustadt – Bad Schandau section of the Bautzen – Bad Schandau line on August 1, 1877, a Kohlmühle stop was set up for the first time. It was only with the opening of the narrow-gauge railway Goßdorf-Kohlmühle-Hohnstein on May 1, 1897, that Kohlmühle was opened to public goods traffic. Before that, the Kohlmühle stop had been expanded to connect the narrow-gauge railway to the station; a wooden reloading hall as well as a locomotive and coal shed were built. In 1902 the expansion of the factory and the associated development of a workers' settlement led to the founding of what is now the Kohlmühle district.