The Korsar is a sailing boat, a class of boats that is mainly found in Germany, Austria and Switzerland.

The Bavarian Sailing Association under its then chairman Kurt Kallhard wanted a dinghy that was superior to the pirate in terms of sailing and that also used the new developments of the time in smaller boats. However, it should be easier to sail than a Flying Dutchman (FD). Ernst Lehfeld was commissioned with the construction, who then developed the Corsair. In 1958 the first two-man dinghy were built in the Mader shipyard and the Vötterl shipyard. The prototype was tested by Klaus Rösch and Herbert Schuster on the Waginger See .

The corsair quickly gained great popularity, and construction number 100 was recorded as early as 1960. In 1965 he became the second youth championship class of the German Sailing Association (DSV) . The DSV also applied for approval as an international class , but this was unsuccessful.

Bowman in a trapezoidal fiberglass -Korsars 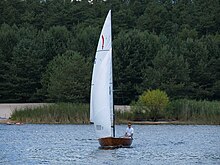 Plywood corsair from the front

Originally the ship was made exclusively from molded plywood, but after a few years the production of plastic boats began . Due to its popularity, there were constant new developments, such as the introduction of the spinnaker trumpet in 1970 .

Today it is made of plastic or a combination of plastic hull and wooden deck. You can get it with a double floor, lowered double floor or semi-double floor. The Korsar with an ergonomically rounded deck has existed since 1999. The interior fittings can be designed individually.

The sailing characteristics of the Corsair are between 470 and Flying Dutchman (FD). The arrangement of fittings is largely the same as the FD: spinnaker trumpet , adjustable shrouds , trapeze , sword adjustment , jib furler , flexible masts and various trimming devices are standard equipment of the regatta boat today.

Thanks to its small wetting surface , the corsair can glide even with little wind . The ideal weight of the team is between 140 and 160 kg. Even for a lighter female or mixed team, the corsair remains controllable in stronger winds thanks to its many trim options. 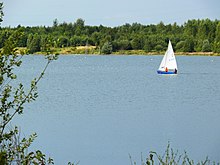 Regattas for corsairs are organized by sailing clubs on many lakes in Europe . Some highlights of the year are, for example, the Travemünder Woche , Warnemünder Woche , the Riva Cup on Lake Garda (Italy), the German, Austrian, Swiss championships and the Euro Cup. From March to November you can also fight for victory in many regional regattas.

There are currently more than 50 ranking regattas in Germany, Austria, Switzerland, Italy, the Netherlands and Poland, through which the best team is determined at the end of each year. The German ranking includes over 100 teams.

The corsair in numbers

There are now over 1,000 members in the corsair associations in Germany, Austria and Switzerland. In addition, there are currently around 5,000 ships registered, with reports of German emigrants taking their boats to Chile and California. With over 3,800 boats built as a trapeze dinghy, the Korsar is one of the strongest classes of the German Sailing Association (DSV) after the Olympic classes . With a further 500 boats in Switzerland, 800 boats in Austria and increasing popularity in Poland, the Corsair is one of the most popular boat classes in Central Europe.

The corsair's sailing symbol is a red curved sword , also known as a sword for short, with its handle pointing down and the edge pointing towards the luff .