Inauguration of the leprosy home

The Leprosy Home Memel was a leper house in Prussian Lithuania . In the 20th century it was the only one in Europe.

In the Memel district , trachoma was spread like an epidemic among school children. Some schools had to be closed. In 1898 there were 470 granulomatous children, in 1913 there were 15 cases. The occurrence of leprosy was more terrible . In the Kingdom of Prussia , the kingdom's first leper was reported in 1848. A maid from neighboring Samogitia had the infectious diseasebrought to Ashpurwen and infected the farmer, his wife and three children over the course of four years. In 1863 a Jewish trader brought leprosy to Bommelsvitte. A shameful servant dragged them to Karkelbeck in 1880. From Ashpurwen the leprosy spread to Wannaggen and other villages and finally to Schmelz. 36 diseases arose from this focus. A second focus was formed with the Wittauten center. He had 15 sick people with him. The other herds stayed smaller. When two children fell ill in the Memel sand weir, the medical community took notice. At the International Congress of Dermatologists in 1892 Eduard Arning gave a detailed report on the occurrence of leprosy in the Memel district. The Memel doctor Julius Pindikowski attracted more attention, who published a list of those who died of leprosy in the Memel district and the lepers living there in the German Medical Weekly . He was probably the first to think that a leprosy was needed in the Memel district. Alfred Blaschko traveled to the infected area in 1896 to study the epidemic . Blaschko considered the Grobin district and the Courland Governorate and the Kovno Governorate as the starting point of the Memel epidemic . He was followed in September of the same year by Robert Koch , whom the Prussian minister of education had sent. Koch was accompanied by Peter Urbanowicz, the Royal District Physician in Memel. Koch should determine the extent of the epidemic and identify suitable means of defense. Like Koch, the international leprosy conference convened in Berlin in 1897 "came to the conclusion that the most thorough and quickest means of suppressing the evil was the unconditional segregation of the lepers, and that this isolation could only be achieved through a leprosy home under medical supervision" . Built according to plans by Josef Callenberg , it was inaugurated on July 18, 1899 in the presence of Minister of Education Robert Bosse and Upper President Wilhelm von Bismarck . It cost the state of Prussia 97,500 marks . So a bed cost 4,432 marks. At the inauguration, 15 sick people were admitted. In 1907 a case was reported in the Heydekrug district . The strict isolation made the disease disappear from the area. Sick people from all over Germany were later brought to the leprosy home. Two came from Paris and Java. During the Russian invasion at the beginning of World War I , the leprosy home was looted. When the Peace Treaty of Versailles forced the cession of the Memelland , the Königsberger Diakonie remained responsible for the leprosy home. Plans to build a new leprosy home were abandoned because it was considered sufficient and cheaper to place the few sick in segregation wards in hospitals. In 1942 the leprosy home came into the possession of the government in Gumbinnen . 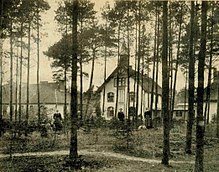 The leprosy home was 2 km north of Memel in a spruce and birch conservation area. Designed by the Kunstgewerbemuseum Berlin and executed by Otto March , a sgraffito adorned the front of the administration building: Christ heals a leper . The home was able to accommodate 8 men and 8 women, and from 1909 22 sick people. The number of cases reported by September 30, 1944 was 42 men and 52 women.

“Close to Memel, but deep in the solitude of the plantation forest, a white gable with a clock tower above the roof shone surprisingly between tall, dark trees. If you went closer to see more, all you could see all around was a high wooden fence. But behind this mysterious fence was a wonderful paradise: a wonderful garden with the loveliest flowers. And in the middle of this splendor, framed by fragrant lilacs, stood a bright, friendly house. There was hardly a more beautiful and idyllic place than this enchanted building and its large flower garden. All around, the sea wind rushed through time and eternity into the peaks. The Baltic Sea whispered mysteriously across the sea depth to this place. And on quiet summer evenings the sprouts sobbed and cheered into the night. The great God nature is merciful and benevolent - here, too, it made no difference. It is there for everyone. But still a cold shiver ran down our spines when we happened to pass here: This paradise was the Memel leprosy home. Here lived people who were buried alive, whom the world had written off. They knew that they had nothing in common with the outside world, that every stranger would flee from them. They no longer had any hope of seeing their hometown, their birthplace, their parents' house again. For them there was only one inside, no outside with hiking and traveling, with sea and mountains. " 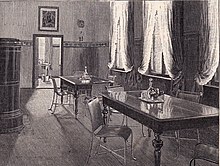 The medical management of the home and the treatment of the sick was always entrusted to the respective district doctor (official doctor) as an epidemic specialist. That was Dr. Urbanowicz and (probably last) Dr. Kurt Schneider. The doctor's room was equipped with a storage frame for examining the sick, surgical instruments for amputations and an apparatus for the pure culture of the leprosy bacilli. The two nurses came from the Königsberg Deaconess Mother House of Mercy. One was also responsible for the management and management of the home. Other staff included a cook, a housemaid and a househusband. From August 1907 the deaconess Emilie Uszkoreit (born October 8, 1873 in Stonupönen ) cared for the sick in war and peace for 37 years. Among the residents were also those who had been infected in the tropics .

When Memel was evacuated , the leprosy home had to be evacuated in October 1944. The sick were transferred to Koenigsberg on a board for three days and handed over to the care of the Deaconess Hospital of Mercy. When the Königsberg Fortress fell on April 9, 1945, the last eleven residents of the leprosarium were brought to the German disease hospital. It was housed in the former mental hospital on Alte Pillauer Landstrasse. They were isolated and cared for by the sisters Eva and Käthe Leckschas. Both deaconesses had been working in the Memel leprosy home for a long time and had been evacuated with the sick. In the following months all the sick. Only Carl Grimmeisen (born September 18, 1886 in São Paulo (federal state) ), who spent his childhood in Brazil and was probably infected in Ribeirão Preto , remained alive . Since 1903 in the Memel leprosy home, he went blind at the age of 26. In June 1945 the infection hospital moved to the Yorck hospital under Wilhelm Starlinger's direction. After their expulsion from Kaliningrad in April 1948, Waltraud Keller stood up for Carl Grimmeisen and the Leckschas sisters. After many letters to prominent doctors and important institutions, she obtained an entry permit for Grimmeisen from the Foreign Office. He should be treated in the University Hospital Hamburg-Eppendorf . He had been brought from Konigsberg to the leprosarium in Talsen near Riga. The two sisters had been evacuated to Germany. Given the circumstances, Grimmeisen was doing well. His dearest wish was to travel home and talk to his (healthy) siblings. He died in Talsen on April 28, 1954.

“I've been sick for 47 years; but when I am asked whether I would like to go through this life again, then I can only answer: yes, also with leprosy. "