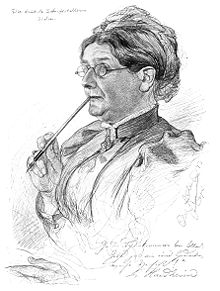 Ahlborn was born as the eldest daughter of the Hanoverian judicial officer E. Jaeger. She received lessons from private tutors , but finished school in Göttingen , where she temporarily lived with her grandparents. She married the tenant Ahlborn in 1855 and from then on lived on the loan property in Ehrenburg in the Diepholz district . Her husband died in 1873. Luise Ahlborn only began to write after his death. She mainly published novels, most of which had historical content. Her work, Schloss Favorite , was published in its third edition in 1906. After the death of her husband, Ahlborn first moved to Osnabrück and in 1881 to Hanover . From 1895 to 1902 she lived in Bad Harzburg , but then returned to Hanover. In 1910 she moved to Hildesheim to live with her daughter Marie Remmers, where she died in 1921.