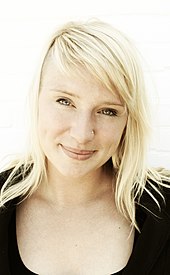 Luise Amtsberg (born October 17, 1984 in Greifswald ) is a German politician from Bündnis 90 / Die Grünen . She has been a member of the German Bundestag since the 2013 federal election .

Amtsberg grew up in the East Berlin district of Karlshorst . In 2004 she graduated from high school in Hemmoor, Lower Saxony . From 2004 to 2013 she studied Islamic Studies as well as political science and Protestant theology as a minor at the Christian-Albrechts-Universität zu Kiel . There she was AStA chairman in 2006 . In 2013 she completed her studies with a master’s thesis on feminism in Islam using the example of the Palestinian women's movement .

After an internship in the state office of the Greens in Kiel in 2005, she became an assessor on the district board in 2006. From 2008 until she moved into the state parliament, she was a student assistant at the state office. In addition, in 2008 she became the spokesperson for the regional working group on Europe , Peace and Foreign Policy . In 2009, as a representative of the Green Youth, she was placed in 9th place on the state list for the state election ; After the election, she moved into the Schleswig-Holstein state parliament as the youngest woman to date . She acted as the spokeswoman for the green parliamentary group for refugee and migration policy , integration, the church and strategies against right-wing extremism . In the early state elections on May 6, 2012 , she did not run again in order to devote herself to completing her studies. From November 2012 to August 2013, Amtsberg was district chairman of the Greens in Kiel.

In March 2013, Amtsberg was voted number 1 on Schleswig-Holstein's green state list for the 2013 federal election, through which she entered the Bundestag as a member . The parliamentary group of Bündnis 90 / Die Grünen elected her as spokeswoman for refugee policy and citizens' concerns.

Amtsberg is a member of the non-partisan European Union Germany , which advocates a federal Europe and the European unification process.

For the 2017 federal election , Luise Amtsberg ran again at number 1 in the Schleswig-Holstein Greens and as a direct candidate in the constituency of Kiel . There she achieved 14.4 percent of the first votes (4.4 percentage points more than 2013). The Greens were able to increase their share of second votes nationwide from 9.4 to 12.0%, thus Amtsberg once again entered parliament via the list. She is a full member of the Committee on Home Affairs and the Committee on Human Rights and Humanitarian Aid as a deputy member.

Amtsberg is the mother of one son.

Amtberg sharply criticized the asylum policy of the grand coalition in the 18th legislative period . With the expansion of safe countries of origin , the surveillance of those seeking protection, the systematic separation of families and deportations to crisis areas, the basic right to asylum has been "eroded at such a rate and extent that the bars are bending". The main basis of this criticism is Amtsberg's view that the right to asylum is an individual right . This means that everyone has the right to an impartial examination of their asylum application. With the expansion of the safe countries of origin and the new categorization of people with a so-called “poor prospect of staying”, the grand coalition is undermining the core of this fundamental right in an inadmissible manner. The focus is no longer on the individual person and his or her fate, but on how high the asylum recognition rate is in the country from which one comes. In this context, Amtsberg said repeatedly that this would have serious consequences, especially for Afghan people seeking protection, as it would effectively exclude them from language courses and would not support them in their professional and social integration.

Amtsberg described the restriction on family reunification adopted by the CDU / CSU and SPD in 2016 as a turning point because it is one of the most important legal and secure access routes to Europe. Restrictions on family reunification are "not only irresponsible in terms of human rights, but also irresponsible and short-sighted with a view to integration and social cohesion". Amtsberg vehemently rejects the deportation of people to war and crisis areas, especially Afghanistan . In this context, she criticized the Federal Ministry of the Interior and the Federal Foreign Ministry not orienting themselves towards the actual security situation in Afghanistan, but instead constructing their own facts far from the reality on the ground. This is "a populist election campaign on the backs of those seeking protection".

The abolition of the Dublin system and the sharing of responsibility for the reception and distribution of refugees are the focus of Amtsberg's European refugee policy. In addition, Amtsberg advocates legal access routes to Europe so that those seeking protection can do without life-threatening routes and the help of criminal smugglers. Amtsberg advocates treating refugee policy not as a national regulatory issue, but rather viewing it more broadly. Combating the causes of flight is central here: a fair trade policy, crisis prevention, climate protection and development cooperation are the focus.

Amtsberg stated in 2019 that she “initially didn't believe in God”, although she had studied theology.