Neutral beer mug without a logo of a brewery or similar.

A Maßkrug is a beer mug that holds the volume of a Maß . In Bavarian and Swabian it is called the mass ([mas], with a short closed a as in barrel ), in other regions the measure ([maːs], with a long a as in tape measure ). “One measure” originally corresponded to 1.069 liters and became exactly one liter with the metric system.

The measuring jug (also Maass jug ) was a unit of measure recognized throughout Europe in the 19th century and corresponded to 1.069 liters. Consequently, “a measure” is simply to be understood as “a volume unit” and thus as a beer measure .

In Bavaria and Austria, the Maßkrug is used for both beer and mixed beer drinks, such as Radler or Goaßmass and other alcoholic beverages, such as Snowmass or Laternmass .

Old "Keferloher" beer mugs from Wörth on the Danube

The earlier common clay beer mugs (called " Keferloher ") were increasingly exchanged for glass ones at the end of the 19th and beginning of the 20th century . In Franconia and among connoisseurs, the clay mug is still preferred, as the beer stays cool longer in this. However, you cannot tell at first glance whether it has been poured correctly. If a measure is required in Bavaria ("Oa Mass!" If the number is emphasized, otherwise "a Mass!"), It is taken for granted that it is a measure of light or at certain festivals such as the Oktoberfest, Märzenbier .

Until 1811, different quantities were defined for one measure in what was then the Kingdom of Bavaria (for example, 1.17 liters in Würzburg). These were standardized with a content of 1.069 liters ("Bavarian measure") and thus adjusted approximately to the historical Bavarian measure of 50 karl cubic inches, i.e. 1072.327 ml. In 1871 (according to another source on April 29, 1869) the measure was converted to the metric system of units with the establishment of the German Empire and finally set to exactly one liter. Until at least 1885 there remained manufacturers of beer mugs according to the old standard.

Traditionally, the continuous groove above the "eyes" was used as the standard for glass beer mugs. The new version of the Measurement and Verification Act from 2013 has required beer mugs with a separate calibration mark, which is about 3 mm above the groove, since 2015. 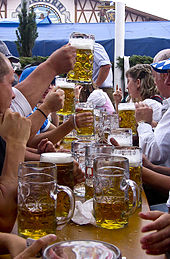 The Oktoberfest beer mug, a collector's mug that is redesigned annually for the Munich Oktoberfest and shows the Oktoberfest poster motif, is particularly well-known . In contrast to the glass mug, in which beer is served in the festival tents , the Oktoberfest mug is made of stoneware.

The traditional clay beer mugs can also have a tin lid . In order to be able to attach it better, there is always a notch on the handle of the jug, even if the jug has no lid. This design feature still exists in newer beer mugs made of glass. Contrary to popular belief, it is not a predetermined breaking point to reduce the risk of injury during fights. In the case of clay mugs, it was difficult for the guest to see the fill level, which was sometimes taken advantage of by innkeepers. The “ Association against fraudulent pouring ” was formed against fraudulent hosts . V. (VGBE) ”, in order to check the filling quantity by voluntary inspectors.

There are "eyes" on the glass jugs (eye jugs). These flat, round recesses serve to give the glass body more stability and a more pleasant look. Contrary to popular belief, the eyes are not intended to prevent fingers from slipping when bumping into them. Since grasping the beer mug through the handle when bumping it harbors the risk of pinching your fingers between two jugs butting it, this is obvious. Therefore, the experienced person only grabs the mug by the handle to bump it.

The eyes can be used as a yardstick (not to be confused with a sense of proportion ): For example, it is common to define the mixing ratio of a Radlermaß by the number of eyes for the lemonade, so the order is: "A Radlermaß with two eyes lemonade, please! ".