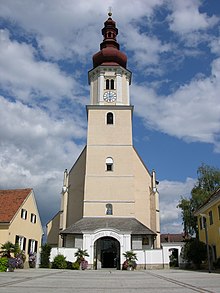 The Roman Catholic pilgrimage church Maria Trost is located in Fernitz in the municipality of Fernitz-Mellach in the Austrian state of Styria . It is an important late Gothic building that was built between 1506 and 1514 and is particularly known among art historians for the remarkable vault solution in the choir area .

Maria Trost in Fernitz has been a place of pilgrimage since 1150, making it one of the oldest in Styria. According to legend , a statue of Mary disappeared from Vasoldsberg , a neighboring town, and was found in a thorn bush in the meadows of Fernitz. Although this statue was brought back to its original location three times, it is said to have always been found in the floodplains. 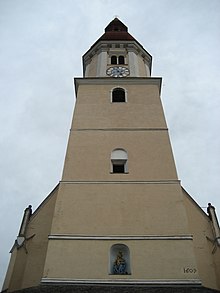 The first Romanesque chapel was built by the Barons von Pranckh around 1160 for this miraculous statue of the Virgin Mary. Because many pilgrims soon came, it was decided to build a church. Duke Frederick the Fair therefore had a church built in high Gothic style in 1314. On the north side of the church, two floors of the tower of this first church are still preserved.

Today's late Gothic building, a three-aisled hall church (built 1506–1514) probably owes its emergence to the urging of the people of Graz, especially the emperor Friedrich III, who resided in Graz . When the three “God's plagues”, Turks , locusts and plague, broke out over the country in 1480 (see the “God's plague fresco” on the south wall of Graz Cathedral ), according to the vernacular the pledge was: “Mary in the distance ... you help me, I'll be happy to help you! ”The small imperial eagle in relief on the outside of the choir and the baroque imperial eagle in the vestibule of the main entrance (1734) are still reminiscent of the emperor as the client.

The building that exists today was built by the same building works as the Graz Cathedral . The vault in turn shows similarities with that of the Graz parish church . Many artists who worked on decorating Graz churches were also active in Fernitz, such as Veit Königer , Hans Pascher and Josef Schkotnigg . 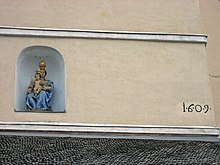 Coming from Kalsdorf or Hausmannstätten , the 68 m high tower on the west side of the church can be seen from afar. Michael Arhahn placed the tower on the square substructure, which had been in place since the church was built, in 1669, crowned by a baroque onion dome from 1742. The year 1609, which can be seen at the lower end of the tower, should correctly read 1669. Until the tower was built, the west facade of the church above the tower hall was free and decorated with two windows and statues. The baroque tower Madonna, carved from a piece of oak, is attributed to Wilhelm Storer and was created around 1676. A relief of St. Christopher can be seen on the south-western tower pillar, which has since been badly damaged. The main baroque portal from 1734, designed by Josef Schkotnigg , is located in the tower vestibule under the tower .

The rich decoration of the south portal comes from the same master who designed the Christophorus relief : pinnacles , crabs and finials . You can see Mary sitting in the tympanum and an angel above her.

Main nave and central pillar in the choir area

Vault in the nave

The church is best known for the unusual vault in the choir area . The three-aisled , four-bay nave is followed by a hall choir with a central pillar, which can be seen as a hexagonal central room. In the nave, the vault consists of yoke-shaped rib stars, which are more richly designed in the broader nave. At the western end of the nave, master stonemason Andreas Zeiller installed an organ gallery in 1751 , on which an organ by Friedrich Werner (1869) is located. Inside the church is 34 m long and 16 m wide, the windows decorated with three- pass , four-pass and fish bubbles are 9 m, the beautifully designed pillars 16 m high.

The baroque altars by Veit Königer have not been preserved because they were replaced in 1895 by neo-Gothic altars designed by Hans Pacher . On the high altar is a late Gothic statue of the Virgin Mary (from around 1520, so it is not the one mentioned in the legend). The church stalls were made by Josef Angerer in 1744, as were the door leaves on the portal with beautiful inlays.

To the north of the church is the so-called Kreuzkapelle (also: Gallerkapelle ), which was added after the completion of the church, but before 1535. This chapel was converted into a family chapel by Siegfried and Friedrich von Galler in 1668 . You can see a stucco ceiling in cartilage style , two epitaphs from 1669 and 1696, an altar with a crucifixion group (around 1780) and in a shrine the relics of St. Zoticus, which were transferred from Rome in 1854 .

Next to the chapel there is a framework portal with the year 1506 , through which one reaches a groin vaulted, frescoed room under the old tower of the previous church. From here a door leads into the sacristy , built in 1623, which contains an early baroque lava niche , a late baroque cupboard and a pieta (oil painting) from Lithuania (around 1820).