Mathew Brady is a redirect to this article. For other people, see Matthew Brady . 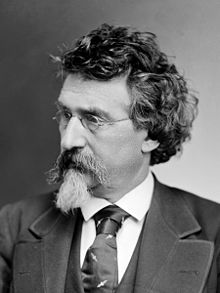 Mathew B. Brady (born May 18, 1822 in Lake George , Warren County , New York , † January 15, 1896 in New York City ) was an American photographer , an important chronicler of the Civil War and thus one of the first photographic war correspondents .

Brady was born to Irish immigrants in Warren County, New York State. At the age of 17 he left his home for New York City. Samuel FB Morse had already got to know the daguerreotype in the spring of 1839 at Daguerre, but did not learn the secret of its manufacture. He later taught many Americans, including Brady, and became the "progenitor" of many American studios. In New York he ran his own photo studio from 1844 and in 1845 he began to exhibit his portraits of famous Americans. Brady's early works, for which he has already received various awards, were daguerreotypes; In the 1850s, ambrotypes became popular and soon had to give way to album printing , a process that made it possible to make paper prints from large glass negatives and which was to become the most widely used process for the photographic documentation of the civil war.

Brady's quest to document the Civil War on a grand scale by moving his photography studio straight to the battlefields earned him a place in the history books. Despite the obvious dangers, financial risks and dissuading his friends, he said, as quoted later, “I had to go. A ghost in my feet said 'Go!' And I left. " His first notoriety photos of the war were taken at the First Battle of the Bull Run , where he was so close to the action that he was almost captured.

He employed the photographers Alexander Gardner , James Gardner, Timothy H. O'Sullivan , William Pywell (1843–1887), George N. Barnard and 18 other men, who, equipped with portable darkrooms , set out to document the war with photographs. Brady himself usually stayed in Washington , where he organized the work of his assistants, and rarely went to the battlefields himself. One notable exception was the Second Battle of the Bull Run in 1862, where he took photos of retreating Union soldiers , which caused a sensation at the time.

In 1862 Brady showed an exhibition of photographs from the Battle of Antietam in his New York gallery , entitled The Dead of Antietam . Many of the photographs on display were drastic representations of corpses, which was something completely new to America. Such pictures had never been shown before.

During the war, Brady was for the production of around 10,000 photographs over 100,000 dollars from. He assumed that the government would buy the photos after the war; when that didn't happen, however, he was forced to sell his New York studio and file for bankruptcy . The Congress grant him US dollars 1875 25.000; However, this could no longer save him from his deep debt. Depressed by his financial situation, Brady became an alcoholic and later died impoverished in the poor ward of the Presbyterian Hospital in New York City from complications from a streetcar accident. His burial in Washington Convention Cemetery was funded by veterans of the 7th New York Infantry .

After Brady's death, his nephew by law Levin Corbin Handy ran his business. The images created by or under Mathew Brady's supervision can be found today as the Brady Handy Collection in the Library of Congress .