Mauges is the name of a western French landscape within the former county of Anjou or today's Maine-et-Loire department . The area of ​​the Mauges is defined less historically than natural geography.

In terms of natural geography, the granite and slate- rich plateau of the Mauges, sloping gently to the south, forms the extreme southeast of the Armorican massif, which makes up a large part of Brittany further west . The area is bounded in the north by the Loire , in the east by the Layon river , in the west by the Sèvre Nantaise and the Moine ; in the south and south-west the boundaries to the Vendée are blurred - this is why one sometimes speaks of the Vendée angevin . The most important cities are Cholet and Beaupréau ; the most important river in the interior of the Mauges is the Èvre , which flows from south to north and flows into the Loire at Saint-Florent-le-Vieil . The highest point is the hill of Trottières (216 meters above sea level).

Early medieval names for the landscape all contain the Latin word metallica , which suggests ore mining; but so far no mines etc. have been found. Apart from a few small and medium-sized towns, the Mauges area is largely characterized by agriculture. In the east of the Mauges - unlike in the other parts - even viticulture can be practiced.

In the Cholet area, prehistoric stone tools have been found that are between 300,000 and 400,000 years old; Traces of the Neanderthal man between 10,000 and 100,000 years old have also been discovered. There are also some prehistoric monuments ( menhirs , dolmens ) in the Mauges; however, Celtic tribes and Romans left no archaeological traces.

Overall, the area of ​​the Mauges was always in the shadow of the large and important counties ( comtés ) or duchies ( duchés ) of the surrounding area. Only in the short period of the Vendée uprising , i. H. In the years 1793 to 1796, the western French landscape moved into the focus of French, sometimes even European, interest for a few years. Above all, many dissatisfied peasants joined the Catholic-royalist movement, which was able to defeat the initially weakly occupied republican garrisons in the cities (Cholet, Angers ) relatively easily. Ultimately, however, the movement ended in a wave of executions and displacement that bordered on genocide, instigated by the revolutionary forces. 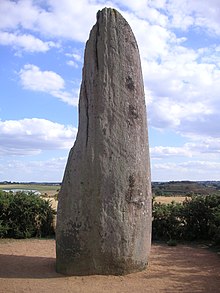 The Mauges do not belong to the classical cultural landscapes of France - despite the strong religious anchoring of the population in Catholicism, Romanesque and Gothic church buildings are almost completely missing .