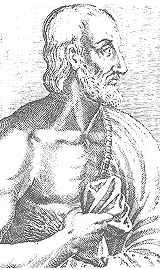 Depiction of Count Fulkos III. from the 17th century

For almost the entire time of his rule, Fulko found himself in military conflicts with his neighbors, who initially tried to take advantage of his father's death to eliminate the extended influence of Anjou in western France . Especially the Breton Count of Rennes , Conan the Crooked , brought the Anjou into trouble. In 990 Conan conquered the Anjou-controlled county of Nantes and assumed the title of duke. Fulko immediately moved with an army to Brittany and won the second battle of Conquereuil (992) over Bretons and Normans, Conan was killed in battle.

Freed from a threat in the west as a result, Fulko, in close alliance with the Capetian kings , turned against his eastern rival Odo I of Blois . Fulko had already attacked this in 990 by pillaging Saumur , Chinon and Blois , but he was pushed back by Odo's follower Gelduin von Saumur, who was called "Fuyons, the devil of Saumur". Odo fought back in the winter of 995, besieged Fulkos Langeais Castle and could only be driven out after an intervention by King Hugo Capet . After Odo I von Blois died in 996, Fulko took advantage of the situation and attacked the Touraine again , but Odo's widow Bertha married the new King Robert II in the same year and persuaded him to take sides in favor of her sons from his first marriage, whereupon Fulko had to drop his conquests again. In return, Gelduin von Saumur used Fulkos absence during his first pilgrimage 1002-1003 to devastate his land and to build the castle Pontlevoy , in the middle of Fulkos area of ​​influence in the Touraine.

Then there was a long lasting peace between Anjou and the Blois, which Fulko used for an intensive castle building (including Loches , Montbazon , Montrichard , Montrésor ) and another pilgrimage (1008). This was necessary because Fulko had recently been excommunicated by Bishop Fulbert of Chartres for murdering Count Palatine Hugo von Beauvais, who was a partisan of Blois, in front of the king during a royal hunting party. This renewed absence took Odo II of Blois to the occasion of a renewed attack on Fulkos castles in the Touraine, but Fulko took up the fight immediately after his return. In the Battle of Pontlevoy (1016) Fulko narrowly escaped defeat and was only able to force Odo to flee after the intervention of Count Herbert I, the watchdog of Maine . He had all captured enemies slain. In 1026 Fulko himself attacked his rival and, after a night march and a short fight, conquered the mighty Saumur Castle, whose city he had burned down. While standing on a burial mound he is said to have shouted: “ Saint Florentius , let them burn. I will build you a better home in Angers. ”But when the transfer of the saint's relic to Angers caused difficulties, he declared him a peasant booby, not a part of his town, and sent the remains back to Saumur .

Between 1031 and 1033, Fulko was a support to King Henry I during the opposition of Queen Constanze and her younger sons, who had allied themselves with Odo von Blois, and besieged Sens . Together with the Norman Duke Robert the Magnificent , Fulko went on his third journey to Palestine in 1034 , and his son took over power in Angers on his behalf. After his return, Fulko was only able to force him to give up the regency after Gottfried had initially refused. After that, Fulko continued to feud with his rival Odo von Blois and captured the castle of Saint-Aignan , whose lord Gottfried von Donzy he captured and later executed.

In addition to his military activities, Fulko was an important builder. From 987 to 1040, his reign, he had more than a hundred castles, donjons and monasteries built, including in 1007 the Abbey of Beaulieu-lès-Loches ( Belli Locus ), where he was buried, and the Abbey of Saint-Nicolas, founded in 1020 at Angers . Many of the foundations of monasteries followed violent attacks against the church. He also supported the construction of Angers Cathedral .

Fulko was known for his violent nature, in which many of his contemporaries were in no way inferior, as well as for his penitentiality, which led him to four pilgrimages to the Holy Land (1002, 1008, 1034, 1040).

Erdoes writes: “Fulk of Anjou, looter, murderer, robber and perjurer, a really terrible character of diabolical cruelty, founded not one but two great abbeys. This Fulko was filled with boundless passion, an extreme temperament. Whenever he had the slightest disagreement with a neighbor, he invaded his country, devastating, plundering, raping and killing, nothing could stop him, least of all the commandments of God. "

Fulko did not shy away from any cruelty, he made known the fate of his first wife Elisabeth, which was recorded in the Chronico Monasterii Sancti Albini Andegavensis . Elisabeth was a daughter of Count Burchard I the Venerable of Vendôme , who wanted to win Fulko as an ally against the common enemy Blois through this marriage . Elisabeth bore her husband a daughter, but Fulko had wanted a son. Believing that Elisabeth could not give him a hereditary keeper, he pursued her repudiation. In order to be free for a new marriage, Fulko accused his wife of adultery with a goatherd and recognized the daughter as Elisabeth's bastard . But instead of waiting for an ecclesiastical dispensation for a divorce, Nerra took up the matter herself and had Elisabeth burned in her wedding dress in front of the people of Angers. A few days later, the city itself was destroyed by a fire. Both the people and the count saw it as a punishment from God, after which Fulko went on a pilgrimage to Jerusalem for the first time .

"They came from the devil - the devil they will return ..." was the verdict of the Norman-Welsh chronicler Giraldus Cambrensis of the Plantagenet dynasty, descended from Fulk the black . Gerald passed down the legend that the Plantagenets were descended from a woman Fulkos, who made her husband suspect that she always avoided attending Holy Mass . When Fulko tried to force her to go to church, she seized her two sons and flew them away from a window of the church. Richard the Lionheart himself has been using this legend since about 1175: "Who is surprised if we do not have the natural sensations of the human race ... we come from the devil and we have to go back to the devil." Later versions of this story were made with the legend of interwoven with the fairy Melusine .

In addition to being titled Consul , the author of the Gesta Ambaziensium Dominorum ( Deeds of the Lords of Amboise ) compared Fulko with the Roman dictator Gaius Iulius Caesar by referring to Fulko as "the other Caesar" in an interpretation of Sallust's Coniuratione Catilinae . His long-time rival Odo II von Blois is contrasted with him as Cato the Younger .

Before 990, Fulko married Elisabeth of Vendôme († December 999), daughter of Count Burchard I of Vendôme and Elisabeth of Melun . From this marriage the daughter Agnes († February 26, 1033/35) was born. After the heirless death of her maternal uncle, Renaud († 1017), Agnes became the legal heiress of the County of Vendôme . Through her marriage to Bodo von Nevers († 1023), this fief came into the possession of the House of Monceaux .

In the second marriage, which was closed around 1000, Fulko was connected to Hildegard. Hildegard's exact family origin is unclear, but it is often associated with the family of the Lorraine Sundgaugrafen . Hildegard founded the Saint-Marie de Ronceray Abbey in 1028, which she entered as a nun after the death of her husband. She died on April 1, 1046 during a pilgrimage in Jerusalem and was buried in the Church of the Holy Sepulcher . Both children were: