Le Pin-en-Mauges is a village and a former French commune with 1,378 inhabitants (as of January 1 2017) in the department of Maine-et-Loire in the region of Pays de la Loire . It belonged to the arrondissement of Cholet and the canton of Beaupréau .

Le Pin-en-Mauges is about 95 meters above sea level. d. M. in the landscape of the Mauges . The distance to Angers is approx. 42 kilometers (driving distance) in a northeasterly direction. 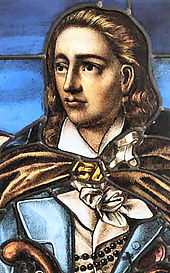 The surroundings of the place are mainly agricultural. But new jobs have also been created in a commercial area ( industrial zone ), which has led to a slight increase in population.

In the years 1793/94 the Vendée uprising took place in the area ; one of the leaders of the insurgents, Jacques Cathelineau , was born in Le Pin-en-Mauges.