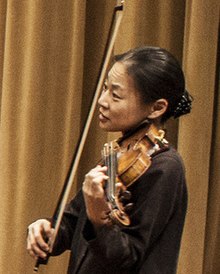 Midori was born in Japan in 1971 as the daughter of a violinist and an engineer. She started playing the violin at an early age, first under the guidance of her mother, Setsu Goto. She attended elementary school from 1978.

In 1981, Midori attended the summer course at the Aspen Music Festival, led by Dorothy DeLay . Her mother accompanied her during her stay in America and successfully tried DeLay to get her daughter admitted to New York's Juilliard School . In February 1982 both moved to New York, so that Midori could begin her preparatory studies with Dorothy DeLay in the Pre College Program of the Juilliard School in March. In parallel, Midori attended the private Professional Children's School, where she graduated from high school in 1991. However, she left the Juilliard School prematurely in 1987 after differences between her family and the school. In 1988, Midori's half-brother Ryu Goto was born.

On December 30, 1982, the eleven-year-old made her debut with the New York Philharmonic Orchestra under the direction of Zubin Mehta at Avery Fisher Hall in Manhattan . In Tanglewood , at the age of 14, she delighted audiences, critics and musicians when she played the fifth movement of Leonard Bernstein's self-conducted serenade on three different violins because of two broken electric strings. Midori soon developed into an international violin virtuoso, performing as a soloist with orchestras and recital gymnastics.

Driven by self-doubt and feelings of inferiority, she had also developed a striving for perfection, which in 1994 led to a breakdown. In five years of therapy with several hospital stays, she managed to overcome this crisis, which was characterized by depression and anorexia. Even during this time she repeatedly performed concert engagements, but for the first time allowed herself to be involved in chamber music making. However, according to her own assessment, it was above all the new challenges and successes during her studies at the Gallatin School that helped Midori regain stability and renewed confidence and ultimately pursue her career as a violinist.

In 2001 Midori was appointed violin teacher at the Manhattan School of Music . In 2004 she accepted a professorship for violin at the Jascha Heifetz Chair for Music at the Thornton School of Music at the University of Southern California (USC) and has lived in Los Angeles ever since . Since 2018 she has been teaching violin at the Curtis Institute of Music in Philadelphia , but continues to maintain contact with the USC and its students as a visiting artist .

Midori's first 4/4 violin was the Guarneri del Gesù "ex-David" from 1735. It was loaned to her in September 1985 by Mary Galvin. Later she was able to purchase the instrument from Galvin. Around 1992 the Hayashibara family of entrepreneurs bought the Stradivarius "Jupiter" from 1722 for Midori , which later turned out to be less suitable for them. After two years, Midori only played "Jupiter" occasionally and finally gave it back.

Since around 2000 Midori has played the Guarneri del Gesù "ex-Huberman" from 1734, which the Hayashibara Foundation made available to her for life. She uses bows by Dominique Peccatte, François Peccatte and Paul Siefried.

In addition to her artistic career, the violinist has campaigned for support and education in the musical field by founding the organization "Midori & Friends", initially in the USA and Japan. She is dedicated to four outreach organizations she founded, which are supposed to give people, regardless of origin and age, access to music. In Japan, Midori founded the organization “Music Sharing”, which focuses on concerts and lessons for children and young people interested in classical and traditional Japanese music. The courses, which are offered in schools, hospitals and youth facilities, focus on collaboration and active participation of the audience.

In addition, Midori actively promotes the spread of chamber music in the USA with the non-profit organization “Partners in Performance”, which she founded in 2001 with her Avery Fisher Prize, so that concerts can also be organized in places outside the normal concert scene.

With the 2003/04 season, Midori began a new series of this kind: As part of her “University Residencies Program”, she visits various universities in the USA for five to ten days with artists she has invited. The first stop in this annual program was Chicago. The aim of the residencies is to strengthen the contact between artists, students, faculties and event organizers affiliated with the university.

In the Orchestra Residencies Program, Midori spends a week with a youth orchestra that has ties to a small professional orchestra. She performs with both orchestras and teaches the young musicians. In 2002 Midori worked with Esa-Pekka Salonen and the Los Angeles Philharmonic Orchestra in a two-week residency "On Location".

From 2002 onwards, the violinist realized the project “Total Experience” in various small towns in Japan with the aim of actively involving the audience in the concert. Midori's educational work thus extends to areas outside of her masterclasses for violin students, which she gives worldwide in addition to her regular teaching activities at the Manhattan School of Music and the University of Southern California. From 2006/07 onwards, like the violinist Vadim Repin , she has commissioned works from young composers, which she plays as encores in her recital.

Midori received the Avery Fisher Prize (2001) as well as Japan's highest artistic honor, the Crystal Award, or the Suntory Hall Award. In addition, her commitment to “Midori & Friends” was honored with the Spirit of the City Award from the City of New York, the National Arts Award and the Encore Award. In 2002, Musical America awarded Midori the title of “Best Instrumentalist of the Year”.