The MilRG is housed in the Wiener Neustädter Daun barracks

The Military Real Gymnasium ( MilRG ), correct name " Bundesoberstufenrealgymnasium at the Theresianische Militärakademie (BORG) ", was an upper level realgymnasium with a scientific focus, which was affiliated with the Theresian Military Academy . The school was housed in the premises of the Daun barracks together with other schools, the municipal higher education institution for economic professions , a new middle school and a polytechnic school . Attached to the school was a boarding school run by the military. In October 2014 it was announced that the military secondary school would be closed in June 2018 for financial reasons. In January 2018, the Council of Ministers of the Federal Government Kurz I decided to continue.

In September 2019, the start of a Federal Trade Academy for Leadership and Security at the Theresian Military Academy in Wiener Neustadt with two classes.

After the Second World War , all military activities in Austria were banned by the occupying powers . The takeover of power by the Soviet Union in Eastern and Central Europe caused the Western powers to covertly set up and largely finance cadre troops in their occupation zones in preparation for a future Austrian army. As part of this " B-Gendarmerie ", the first year of the Gendarmerie Department K (K for courses ) began teaching on October 21, 1953 in Enns .

After the conclusion of the Austrian State Treaty , the school in Enns was renamed “ Provisional Border Guard Protection Department ” on July 27, 1955 , and from April 9, 1956 it was called “ Military Academy ”. The move to the castle in Wiener Neustadt , which was rebuilt after severe war damage, took place on December 17, 1958 and in 1966 the school was given its traditional name " Theresianische Military Academy (TherMilAk) ".

At the end of the 1950s it was decided that only people with a high school diploma would be admitted to officer training. Suitable applicants for an officer career from the ranks of NCOs and batches had also registered for the selection course in 1959 , which led to the establishment of a “Realschule Matura course” at the military academy. Shortly thereafter, this training course was integrated into the public school system as a school for working people, in which the participants were to be taken to the Matura in five semesters .

An agreement of November 18 and December 22, 1959 between the Federal Ministry of Defense and the Federal Ministry of Education determined the designation of the school as the “ Federal High School at the Military Academy (BOR) ”. Since then, the teaching department has provided the teaching staff, while the Ministry of Defense bears the material costs. After the School Organization Act came into force in 1962, the designation was changed to “ Bundesrealgymnasium for working people at the (Ther) Military Academy ” (BRGfB) while the schooling period was extended to six semesters.

School and boarding school from 1965

Social considerations to improve the educational opportunities for sons of officers and the fact that a considerable number of offspring were already graduates of the BRGfB led to considerations to set up a school for 14-year-olds with an attached military boarding school. An inter-ministerial agreement of October 6, 1965 between Ministers Georg Prader (Defense, ÖVP ) and Theodor Piffl-Percevic (teaching, also ÖVP) led to the establishment of the Military Real High School (MilRG), whose name was initially " Federal Real High School (nw - natural science) " and that should primarily serve the qualification of future professional and militia officers .

The selection of the pupils, who were designated as pupils after admission , was made by a commission. Certain requirements had to be met in terms of sport, medicine and school. The focus of the training in this federal school - because it was not a private school - was in the field of natural sciences. There was a future concept with a focus on the areas of personality development and leadership. In addition to the pre-military training on individual afternoons and the very wide range of sporting activities (climbing, riding, endurance and weight training, etc.), many social skills were also taught (team building, mediation training / peers, etc.). With the exception of sports, the lessons for the pupils were carried out exclusively by civilian teachers, while the supervision and education in the boarding school was carried out by educators or educator officers.

Since March 19, 1969, the MilRG and the BRGfB formed the so-called school battalion of the Federal Army . From an organizational point of view, the school was declared a school battalion, although the military personnel were in fact only very small and did not consist of 20 people.

School time initially lasted five years, in the last two years military training was planned, which roughly corresponded to the training of one-year volunteers . Since 1972 the name has been " Bundesoberstufenrealgymnasium an der TherMilAk " and the lessons last four years, as in all other upper levels of the Realgymnasien. In addition to training with a focus on natural sciences, the students received “ pre-military training ” to prepare them for a career as an officer.

In 1998 the officer training was installed as a technical college with the degree course "Military Leadership". This gave the school battalion the additional task of carrying out the preparatory course and the additional examination for officer training for qualified NCOs with appropriate service time. Thus, until the closure of the BRGfB on June 28, 2012, there were three forms of training for officer candidates in the school battalion .

After women had been able to volunteer as soldiers in the armed forces since January 1, 1998, the first female pupils began their training at the MilRG in 1999 and the first female military academics were in existence in 2000.

School attendance was generally in uniform. A type of service suit was worn during daily lessons, as was also used in the rest of the armed forces. A gray, double-breasted jacket was used as the starting suit, also known as the A-set. A white shirt with a dark gray tie and gray uniform trousers were also worn. A black beret with the badge of the military high school was provided as headgear . The pupils also wore badges of rank, which indicated the respective status of the school level. There were black distinctions on the starting suit, dark blue distinction loops on the service suit. A narrow golden stripe was visible on each school level. 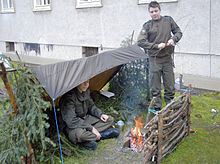 Pre-military training at the MilRG

Combined with the school education for the AHS Matura (focus on natural sciences - with the completed school trial new from 2015/16) and the social coexistence in the boarding school, it completed the educational spectrum and prepared the military high school students for a possible future with the Austrian Armed Forces, ultimately for everyone Areas of external and internal security (Austrian security doctrine). The content of the pre-military education was adapted to the age of the pupils and was implemented on individual afternoons over the course of the week.

This federal school was a unique school in Austria and internationally oriented. Schools from abroad sought contact for cooperation with this house. Most recently there were special school partnerships with the following "military schools":

In the course of the savings plans presented by Defense Minister Gerald Klug in October 2014, the MilRG was supposed to be closed. However, there was massive resistance from the school community because no pedagogically acceptable form of expiry or a sensible transition concept was pursued, but the BORG with its boarding school is to be closed within only two years, although new pupils were recruited and accepted in the summer of 2014. The state school board of Lower Austria guaranteed all pupils who attended school that they would qualify according to legal requirements.

Although the last Matura was supposed to be held in 2018, rumors began to emerge in spring 2017 that the school would continue to exist. The government program that was presented by the Federal Government Short I before Christmas 2017 and was to be continued there provided further breeding ground . However, according to director Sulzgruber, it is not possible to continue running smoothly because, on the one hand, the majority of the teachers have already left the school and, on the other hand, the building is no longer suitable due to insufficient investment.

In January 2018, the newly sworn federal government Kurz I decided to continue the MilRG and expand it into a training facility for the police sector. The concrete future school type has not yet been fixed but has not yet been determined. The only thing that was certain was that the future MilRG would no longer exist in the same building.

In September 2019, the Federal Trade Academy for Leadership and Security at the Theresian Military Academy in Wiener Neustadt actually started with two classes.