The mine divers are part of the Minentaucherkompanie (MiTaKp), a special unit of the Bundeswehr at company level of the Navy . The specially trained mine divers (military divers) focus on maritime weapon handling, ordnance disposal and search and rescue missions (SAR). The unit is part of the sea ​​battalion that was newly established on April 1, 2014 and is based in Eckernförde .

From 1957 to 1984 mine divers were used exclusively in German waters, mainly in the Baltic Sea and there mainly to clear sea ​​mines from the war. They were also involved in the search for and recovery of wrecked ships, submarines and crashed aircraft . The most dangerous task of mine clearance divers consisted ordnance track down and recover that were sunk after the war in the Baltic Sea, some chemical warfare agents contained and therefore jeopardize the shipping and fishing to this day.

The clearing of freshly laid mines in the Suez Canal in autumn 1985 represented the first extraterritorial deployment of mine divers. German mine divers were deployed in this NATO mission on an international sea ​​route where the clearing equipment ( Troika ) developed for the open sea could not be used . Numerous missions were then carried out worldwide, including in international waters, within the framework of the NATO Response Force and the German Task Force (EAV).

Until 1991 the company was an independent unit and then together with the combat swimmer company it formed the weapon diving group. In 2003 the special forces battalion emerged from the weapon diving group. As a result of the transformation, the Marine Specialized Forces (SEK M) were formed in 2003 . At that time the SEK M was divided into the combat swimmer company , the mine diving company, the boarding company and a training inspection as well as other support elements and was dissolved in spring 2014. 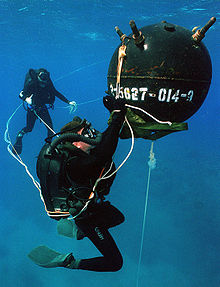 Two mine divers practice disarming an anchor mine

Your areas of application are:

Coat of arms of the mine diving company

The mine divers are trained in the training center in Eckernförde. This unit belongs to the Seebataillon (SeeBtl), and this in turn belongs to the Operational Flotilla 1 . In addition to teaching the fundamentals of diving medicine and diving physics, the operational procedures and the continuous improvement of diving technology, the aim of the training is to determine the physical and psychological resilience of the candidates, to increase them and to push them to the limits of the same.

In order to qualify for training mine divers, the following requirements must be met:

In addition to imparting knowledge of diving physics and medicine , which is far above the level of a sport or professional diver, knowledge of (any kind of) underwater ammunition, tactics and operational procedures is imparted. The largest part of the training consists of practical exercises, fitness training and the associated “sifting” of over 70% of the course participants in the first five weeks of pre-mine diving training.

(An example of training to become a MiTa boatman / officer, some modules can be shifted from one another depending on the planning.) 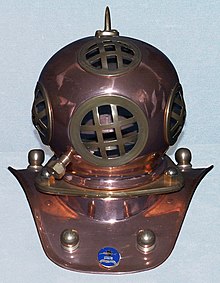 Diving helmet (miniature) with badge of the mine diving company

In individual cases, members of the MiTaKp are also given the opportunity to participate in numerous special courses. Many longer-serving mine divers (eight or more years committed) are z. B. also qualified as a BCE driver , helmet diver (state certified diver), parachutist and / or lone fighter .

The training and operational planning was originally aimed at defending against conventional and "non-conventional" underwater weapons in an emergency in the context of a possible confrontation between NATO and the Eastern Bloc. Since 1985 the tasks and accordingly the training content have been modified. The training for the "removal of unconventional explosive devices and incendiary devices (IEDD)" still takes place in a "special course for the fulfillment of special missions".

Compressed air and mixed gas diving equipment, so-called rebreather , are used by mine divers . The maximum operating depth with the compressed air diving equipment, which is also used for recreational diving, is 50 meters. With the mixed gas device LAR VII (CCR / SCR), the depth in oxygen mode with circulation operation (CCR) is limited to 7 meters. For depths of up to 24 meters, the so-called NATO B mixture (60% oxygen, 40% nitrogen) is constantly supplied in semi-open mode (SCR).

Since 2002 the "FGT II" diving device has been replaced by a closed, electronically controlled mixed gas circuit diving device, the "Stealth EOD-M" from Divex. With this device, the oxygen partial pressure is kept constant or reduced via the mixing ratio according to the depth, so that a depth of 54 m can be reached with the diving device.

Apart from the mechanical and electronic special tools, equipment parts that belong to civil diving equipment are also used by mine divers , but only non-magnetic equipment is used in action.

For the implementation of a mine diving mission, it is necessary to ensure that the personnel (medical diving personnel, safety divers, etc.) and material requirements are in accordance with regulations. In addition, the 10 boats of the Frankenthal class , including the mine diver service boat Rottweil (as a replacement for the Mühlhausen, which was decommissioned in 2007 ) and the diving school boat Langeoog as a replacement for the Hansa in Eckernförde, have on-board pressure chambers for up to 6 people Divers can receive immediate care after accidents. The largest pressure chamber of the German Navy is located in Kiel, in which up to 12 people can simulate the pressure-specific effects of dives at the same time or, if necessary, treatment of an infiltrated, injured diver under pressure can be carried out.

Also as part of the boarding team for the Atalanta and Sophia missions.