The National Basketball Players Association ( NBPA ) is a union for professional basketball players of the North American basketball league NBA . The NBPA was founded in 1954, making it the first professional players' union in team sports. However, it was not recognized by the team owners of the NBA until 1964 as the official representative body of the NBA players. Today the NBPA, as the union, is the sole negotiating partner of the NBA bodies with regard to their players. The union represents players' interests with regard to the league's collective agreement , pension rights and occupational health insurance, among other things .

The star players of the Boston Celtics , Bob Cousy , the NBPA 1954. founded his original goals were premiums for public appearances and curbing the tiring city breaks, which the country has been made at this time by bus across the Northeast and the Midwest. Cousy began his work by writing letters to respected players on all teams asking for support for a players' union. All but one of the Cousy respondents answered positively, which encouraged him to approach the 1955 All-Star Game with a list of complaints to Maurice Podoloff , the then commissioner of the NBA. It was not until 1957, however, that the NBA began to negotiate seriously with the NBPA over claims and to admit some of them.

Healthcare plans and a player pension fund, as well as many other measures that are essential for today's athletes' unions, were not to be pursued by the NBPA until the mid-1960s. The necessary recognition from the NBA was brought about by an incident during the All-Star Games in Boston on January 14, 1964: Two hours before the start of the game, the All-Stars told the NBA commissioner, Walter Kennedy , that they would boycott the game , should not have a valid player pension fund agreement by kickoff. The ultimatum was preceded by frustration at low pay and excessive travel. Since the game was to be broadcast by broadcaster ABC and the broadcasters told Kennedy that a possible television contract with the NBA would never come about with this game cancellation, Kennedy agreed to work out a pension plan with the team owners 15 minutes before the game started.

The Boston incident was unique in US professional sport at the time. Allegedly, the all-stars present were by no means of one opinion: Bill Russell , Lenny Wilkens and Tom Heinsohn , among others, voted for a strike , while Wilt Chamberlain , for example, definitely wanted to play. The final change in mood is said to have come after the owner of the Los Angeles Lakers sent a message to the locker room and ordered his stars Elgin Baylor and Jerry West to play with rude words.

The NBPA identifies these general objectives as the scope of its trade union work: 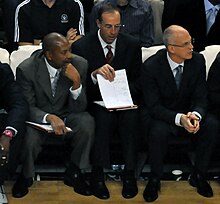 Alex English (left) was both President and CEO of NBPA

Fleisher's successor, Charles Grantham, resigned in 1995 after declaring that there had been "irreconcilable" internal tensions within the union leadership. This was received with surprise and incomprehension among NBA players. In contrast, after less than a year in office, Grantham's successor was fired unanimously from the players' representatives as the only managing director to date. The background was the failed collective bargaining negotiations in 1995 and criticism of Gourdine's management style. Ex-star player Alex English subsequently took over the management on an interim basis until Billy Hunter was appointed.

Hunter led the union for more than 16 years but was unanimously removed from office by the players' panel in February 2013 after an audit report ( requested by then NBPA President Derek Fisher ) found nepotism and financial irregularities.

Hunter then sued both the NBPA and Fisher himself, whom he accused of having colluded with some of the team owners during the 2011 lockout and of later deliberately working towards his, Hunters, release. The majority of the personal lawsuits were dismissed by a court. The lawsuit against the NBPA regarding the illegal termination of a valid contract from Hunter's point of view and the required severance payment of $ 10.5 million was approved.

On July 28, 2014, lawyer Michele Roberts was elected as the new manager by the players' union. She is the first woman to lead one of the major players' associations in the United States.

The salary cap for players (English: Salary Cap ) was introduced as part of the collective bargaining in 1983 and is considered a turning point in the development of the player market in the NBA. The salary cap regulations guaranteed the players 53 percent of the teams' gross sales. The team owners agreed to the agreement because it enabled them to make more or less precise cost estimates and prevented a spiral of rising salaries. The players got involved because it also forced less well-paying teams to take money into their hands for their players.

For the first time in NBA history, after July 1, 1995, all players were literally banned from team owners. So the so-called lockout is not a strike in the classic sense. In fact, NBPA and the NBA could not agree on the framework conditions of the then new collective agreement, so the negotiations failed and the players were excluded. The 1995/96 NBA season threatened to fail until a provisional agreement was finally reached on September 12 and the new season could start without losing a game. Previously, a secretly proposed compromise between the parties had failed through the intervention of a group of players led by Michael Jordan and Patrick Ewing .

The player exclusion prior to the 1998/99 season was the first to cancel games in the current season. Again, no agreement was reached on the collective agreement to be determined. It was not until February 1999 that a short season with only 50 games (instead of 82) per team could be opened three months late. The stumbling block was the NBA's request to adjust the current collective agreement, as they said 13 league teams were losing money. The gaming union rejected this “argument of poverty” with reference to the recently concluded and lucrative new television contracts.

On July 1, 2011, the last collective agreement of the NBA, concluded in 2005, expired without renewal, which led to a renewed exclusion of the players by the team owners. With reference to enormous losses since the introduction of the contract in 2005, the NBA demanded in its original request a reduction in player salaries of a total of 750 million US dollars per season. In the meantime, this demand has been reduced, but according to the players' union, among other points, it was still a long way from compromising possibilities, before the first parts of the schedule for the 2011/2012 NBA season had to be canceled in autumn 2011. A negotiation offer from the NBA on November 10, 2011 provided for a late start to the season on December 15, 2011 and presented a schedule with 72 games per team. The NBPA officially rejected this offer on November 14, 2011, threatened an antitrust lawsuit against the NBA, and publicly announced a possible dissolution of the union. On November 26, 2011, however, the NBA and the players' union announced that they had negotiated a preliminary contractual compromise that would lead to a shortened NBA season 2011/2012 with 66 game days.