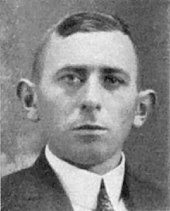 Paul Gibbert was a son of the teacher Josef Gibbert and his wife Katharina geb. Nalbach from Moselkern. After graduating from the Friedrich-Wilhelm-Gymnasium in Trier in 1916 , Gibbert took part in the First World War until 1918 . From 1919 to 1923 he studied economics at the University of Cologne , which he graduated with a degree in economics . In 1919 he became a member of the Catholic student association KDSt.V. Rhineland Cologne. After completing his studies, he took over his parents' mixed business and worked there as a farmer and winemaker .

Since 1925 Gibbert was a member of the German Center Party . In 1929 he was elected to the local council of Moselkern and the district council of the then district of Cochem . Since the Reichstag election in July 1932 , he was a representative of the center and a member of the German Reichstag for constituency 21 (Koblenz-Trier). However, he lost all political offices in 1933. From August 23 to 27, 1944, he was temporarily arrested by the Gestapo and during an examination in the police prison in Cochem he was found capable of being held in a concentration camp .

After the end of the Second World War he helped found the CDU in Rhineland-Palatinate in 1945 . He also participated in the rebuilding of rural self-government and from 1946 until his death he was President of the Rhineland-Nassau Chamber of Agriculture. At the same time, he was temporarily vice-president of the German Viticulture Association and a member of the executive committee of the Rhineland-Nassau Farmers and Winegrowers Association.

Gibbert was a member of the Advisory State Assembly from 1946 to 1947 and then until 1951 a member of the Rhineland-Palatinate Landtag . He was a member of the German Bundestag from its first election in 1949 until his death. There he represented, always directly elected, the constituency of Cochem . He is considered to be one of the initiators of the Wine Industry Act .

Paul Gibbert was born in 1926 with Luzia Gibbert. Pitsch married and had two daughters and three sons with her.