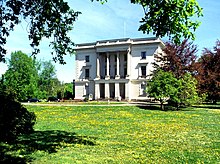 The summer residence in Markkleeberg

Paul Herfurth came from a family of textile manufacturers. He worked in his father's company, Gebr. Herfurth in Chemnitz, and was also responsible for A. Glaser Successor in Hainichen and Penig , where plush and chenille were produced and fabrics were printed. With his brother Edgar he founded the Edgar Herfurth & Co. publishing house in 1892. Ten years later, he founded his own publishing house, which published the family magazine Welt und Haus . Based on the English model, he had initially published a magazine entitled The Upper Ten Thousand . Welt und Haus financed the first trips of travel writer Herbert Rittlinger . 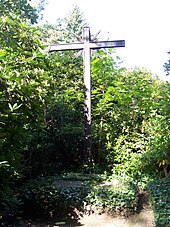 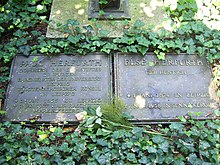 Grave slab of Paul Herfurth and his wife

From his marriage to his wife Else, geb. Rentsch, came the son Paul-Heinz. His second son Otto Herfurth was a German officer and resistance fighter. The family lived in Leipzig at Karl-Tauchnitz-Straße 11 , where the gallery for contemporary art is now. In Raschwitz , today a district of Markkleeberg , she had several villas built, some of which she used herself. Herfurth's wife made the family villa built in 1896/97 based on the model of the Petit Trianon in Versailles , later called the “ White House ”, into a meeting place for cultural bearers.

The landscape park laid out by Paul Herfurth since 1889 was expanded to 30 hectares in the 1920s through land purchases . After the Second World War , the heirs of Paul Herfurth were expropriated without compensation and became public property and since 1948 it has been used for horticultural and agricultural exhibitions ( agra ).

Herfurth was one of the donors of the grain table on Augustusplatz in Leipzig, which was unveiled in 1936 and melted down in 1942 .

So far, the family's heirs have lived in Leipzig. Otto von Herfurth never married, but still had two children. A son Peter and a daughter Regine. Because of the fear for the children it was not possible for them to take the name Herfurth. So Regine took the surname of her mother's second husband, Schilling. She and her family are currently living in Leipzig.

Paul Herfurth was a member of the Second Chamber of the Saxon State Parliament from 1893 to 1899 as a representative of the 10th rural electoral district . Furthermore he was u. a. Commercial judge, royal Württemberg consul, honorary senator of the University of Leipzig and board member of the German textile trade association. He was also a member of the Familiar Society .