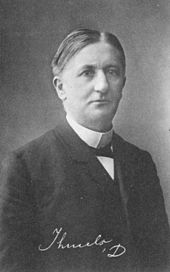 Ludwig Heinrich Ihmels (born June 29, 1858 in Middels , † June 7, 1933 in Leipzig ) was a Protestant - Lutheran theologian and pastor . He was the first regional bishop of Saxony and holder of the dogmatics chair at the University of Leipzig . He represented the theological current of Neo-Lutheranism .

Ludwig Ihmels came from a well-known East Frisian pastor family. His father, Hieronymus Ihmels, was a pastor in Middels from 1843 to 1887 . After graduating from high school in Aurich , Ludwig Heinrich Ihmels studied Protestant theology at the universities of Leipzig , Erlangen and Göttingen from 1878 to 1882 . In 1883 he took up his first pastorate on Baltrum . In 1884 he came to Nesse , 1885 to Detern and in 1894 he became director of studies at the Loccum monastery seminary . In 1901 he received his doctorate in Rostock as Dr. theol. In 1898, as the successor to Franz Hermann Reinhold Frank, he was appointed professor of systematic theology at the University of Erlangen . From 1902 to 1922 he held the chair for dogmatics at the University of Leipzig (representative of the theology of revelation), from where he was appointed to the newly created office of Saxon regional bishop in 1922 , which he held until 1933. During his term of office, the Lückendorf seminary was founded (together with Martin Doerne ) and the Saxon church constitution was passed. In the 500th anniversary year of the University of Leipzig in 1909, he was dean of the local theological faculty. In 1907 he was chairman of the General Evangelical Lutheran Conference . In 1923 he was chairman of the Lutheran World Convention in Eisenach and took part in the Stockholm World Church Conference of 1925. He was an honorary member of the Erlanger and Leipziger Wingolf .

Ludwig Ihmels as Apostle Matthias at the pulpit created by Georg Wrba in 1932 in the Cathedral of St. Marien zu Wurzen

Ludwig Ihmels was married to Johanna Christiana Margaretha Schaaf (1864–1910), who also comes from an East Frisian pastor's family and was the daughter of the superidentifier Karl Heinrich Schaaf (1827–1904). Carl Ihmels , the theologian and director of the Leipzig Mission, was his son and Werner Ihmels , who died in 1949 in the special camp in Bautzen , was his grandson. After the death of his first wife, Ihmels married Martha Hofmann-Löser in 1920.

Regional bishops of the Evangelical Lutheran Church of Saxony