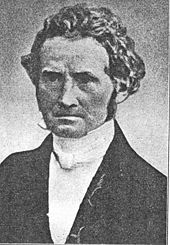 As the son of Hann. Mündener merchant Carl Gottfried Huschke he grew up on the manor in Völkershausen near Wanfried , which his father had bought during the time of the continental barrier. From 1817 Huschke studied law at the Georg-August University in Göttingen . Since 1822 private lecturer , he was appointed full professor at the University of Rostock in 1824 .

In 1827 he moved to the Silesian Friedrich Wilhelms University in Breslau . In 1831/32 and 1845/46 he was rector there . He declined several honorable calls . In 1838 he became a senior and full professor of the Spruchkollegium. He died at the age of 85.

Huschke published Unterholzner's source-based compilation of the doctrine of Roman law on debt relationships after the author's death (Leipzig 1840, 2 vols.). As a spokesman for the Prussian Old Lutherans, he was active in his contributions to the "Evangelical Church Newspaper" and in the theological vote of a lawyer on the Prussian agendas published by Johann Gottfried Scheibel (Nuremberg 1832).

In 1841 he became director of the Oberkirchenkollegium of the Evangelical Lutheran Church in Prussia , which was recognized by the state in 1845 , for whose constitutional principles he stepped in the barriers in the apologetic work The Disputed Doctrines of the Church, the Church Office, the Church Regiment and the Church Orders (Leipzig 1863).

In addition to several smaller legal, theological and philological treatises, he wrote: