View of the police building today

Police building on the former Elisabethpromenade on the Danube Canal

In the police station Rossauerlände in the 9th district of Vienna , Alsergrund , police stations and are Polizeianhaltezentrum housed. The building has been a listed building since April 1, 2003 ( list entry ). Until 1999 the street that gave it its name was officially written as Roßauer Lände .

The construction of another police building near the police headquarters was requested by Police President Wilhelm Marx von Marxberg in an application to the Minister of the Interior in 1874, with which he also intended to purchase the police headquarters building at Schottenring 11 . Although the application was approved by the Kaiser, construction of a new building could only be completed 30 years later. It was supposed to replace both the police prison in the former Theobaldkloster and the Central Police prison in Sterngasse .

At the instigation of the Ministry of the Interior, the Wiener Baugesellschaft and the Union-Baugesellschaft worked out preliminary designs for a new building, although the location question had not yet been clarified. There was an area to choose from in the 9th district between Liechtensteinstrasse and Porzellangasse and another on the then Elisabethpromenade / corner of Berggasse. The demolition of the Alser barracks and a new building in its place, also in the 9th district, would have been desirable . This property was on Alser Strasse opposite the Regional Court for Criminal Matters Vienna , and the police building should have been connected to it by a connecting passage for the transport of prisoners.

Ultimately, the decision was made in favor of the area on the Elisabeth promenade. Due to the decade-long delay in construction, the idea of ​​integrating the kk police headquarters, established in 1875 on the nearby Schottenring, into the new building on the Elisabethpromenade, had to be abandoned for cost reasons. The new building was only built as a branch of the police headquarters.

It was planned to create space for

A connection to the city push and prison house, which was built at the same time in the courtyard of the adjacent houses at Hahngasse 8 and 10, was also included in the planning.

With the creation of the plans for the official building, the Ministry entrusted the Dicasterial Building Directorate ( central authorities were called Dicasteries ), where, under the chairmanship of Hofrat von Friebeis Karl Holzer, Moriz Kramsall and Alfred Keller, the first project sketches were drawn up. The planning basis included visits to new constructions of similar police buildings in the German Reich. In the building construction department of the Ministry of the Interior, these designs were revised under the direction of Emil von Förster . Union-Baugesellschaft was commissioned with the construction of the new building.

In the vernacular "Liesl"

Due to the Elisabethpromenade being the official address until 1919, the nickname Liesl became common among the Viennese population for the building, especially for the police prison . Decades later, in 1986, Bruno Kreisky , who was briefly imprisoned there in 1938 , mentioned the Elisabethpromenade in his memoirs, even though the street was no longer called that in 1938.

The building was built on a plot of 7460 m². Of which were omitted

The 170 m long façade of the five-storey building on the street side with a total area of ​​4300 m² was given a sober horizontal structure and has multiple tiered eaves. For the design of the facade it was required that it should be serious and dignified in accordance with an office building and that it should adapt to the cityscape with modern shapes.

The offices were located on the north-east side, with a view of the Danube Canal, on the Elisabeth promenade, while the living rooms, which were designed so that they could be converted into additional office space without much effort, were built in the wing on Berggasse. The roof structure for the photographic studios was used to group the front facing the Danube Canal, resulting in a large central projection that conceals the resulting obtuse angles of the building lines.

The non-right-angled corner of the building at Roßauer Lände 5 and Berggasse 43 was designed as a domed corner tower (height around 38 meters) with secessionist echoes. Here is also the main entrance, which leads into a round vestibule with a swinging staircase.

The prison in the police building on the Elisabethpromenade was the first such building in Austria whose cells were equipped with toilets. In addition, post offices were set up both here and in the police headquarters at Schottenring , so that urgent documents could also be transported by pneumatic tube .

The police building was badly damaged during the Second World War, but rebuilt in the post-war years. 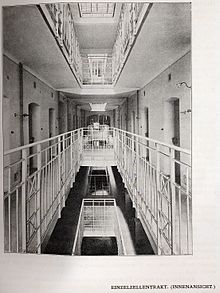 During the time of Austrofascism and the subsequent period of National Socialism in Austria , not only arrested criminals but also numerous political prisoners were imprisoned here. During the Nazi era, most of the opponents of the regime were brought from here for interrogation to the Gestapo headquarters in the former Hotel Metropole on Morzinplatz, just eight blocks away .

The National Socialist student Edgar Traugott, who was imprisoned here during the Austro-Fascist era in 1936, was able to publish the memory book Elisabethpromenade 7/9 - Notes of a Political Prisoner in 1940 . (Before 1938 the Nazi regime used the state persecution of National Socialists in Austria as a targeted political issue.)

The Vienna Police Museum emerged from an exhibition held in 1898 on the occasion of the 50th anniversary of the reign of Emperor Franz Joseph I. In 1899 the Imperial and Royal Police Museum was opened in some rooms in the police headquarters at Schottenring 11 and in 1904 it was moved to the new building on the then Elisabethpromenade. After Austria was "annexed" to the Third Reich , the police museum was closed, the holdings were relocated and the premises were used for other purposes.

The museum was brought back to life in 1984 as the Kriminalpolizeiliches Museum of the Federal Police Directorate Vienna and after merging with the Austrian Kriminalmuseum founded in 1973 in Scharnstein Castle , it has existed as a Viennese crime museum since the end of 1991 as a museum for the general public in Große Sperlgasse in the 2nd district, the Leopoldstadt .