In some cantons of Switzerland, governors are the representatives of the cantonal government at district level . In other cantons they are called governor or chief official in Lucerne formerly Office governor . 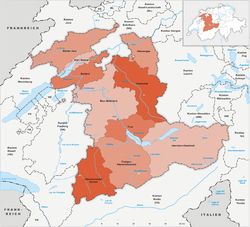 Administrative districts of the Canton of Bern from 2010

The government governor of the Canton of Bern grant example, building permits , decide on appeals against decisions of the communities oversee the administration , the fire departments , police departments of the inhabitants communities , citizens' associations and parishes . You are also responsible for processing inheritance cases. In the event of a disaster, they serve as a coordination point.

Before the revision of the guardianship law , they were also responsible for ordering the welfare deprivation of liberty (today “ welfare accommodation ”). Today, this activity is the responsibility of the Child and Adult Protection Authorities (KESB).

In the canton of Lucerne , the office of the “governor” was created in 1831, who represented the cantonal government in each of the five offices ( districts ). His predecessors in Helvetic Republic (1798–1803) were the “district governor”, ​​in mediation (1803–1814) the “bailiff” and in the restoration (1814–1830) the “chief bailiff”. While the governor initially also carried out administrative tasks such as dance permits etc., over time the investigative judge's activity became the main area of ​​responsibility. As a result of the federal criminal procedure code that came into force in 2011, the governors were replaced by public prosecutors in the same year on the basis of the new cantonal justice law .

In 1849, the governor was assigned an “official assistant” to oversee the communities. It was not until 1963 that this designation was replaced by “governor”. Their tasks included the financial supervision of the municipalities and authorities in their office as well as supervision of civil status , guardianship and inheritance . They were also the first decision-making body on adoptions , deprivation of parental care and welfare deprivation of liberty. After a referendum, the governors were abolished in mid-2014; their tasks were taken over by the municipalities themselves on the one hand, and the cantonal office for municipalities on the other.

In addition, until 2007 the Vice-President of the Lucerne Government Council was called Lieutenant, while the Chairperson was named Schultheiss .