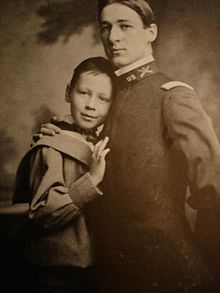 Robert and Edmund Benchley, around 1898

Robert Benchley was the youngest son of Charles and Maria Benchley. Robert's older brother, Edmund Benchley, was thirteen years older and died in the Spanish-American War in 1898 when Robert was nine. The death of his brother had a considerable effect on Robert's life, and his later writings showed marked pacifist tendencies.

Robert attended high school in Worcester and thanks to the financial support of Lillian Duryea, his late brother's fiancé, he was able to study at Phillips Exeter Academy in Exeter , New Hampshire . In 1908 , Benchley enrolled at Harvard University , again with financial help from Duryea. For the first two years he was heavily involved with The Harvard Advocate magazine and The Harvard Lampoon , a satirical magazine published by Harvard University in Cambridge , Massachusetts . During this time his fellow students and professors recognized his snappy humor and writing style; Benchley was often asked to admit it at events and gained some local fame. In 1914 several articles were published in the Vanity Fair and New York Tribune . In June 1914, Benchley married his childhood friend Gertrude Darling. The relationship resulted in two sons, Nathaniel (* 1915) and Robert Jr. (* 1919). Shortly afterwards he was hired as a reporter for the Tribune and he made a name for himself as a theater and society clerk. After the newspaper spoke out in favor of the First World War , relations with the avowed pacifists deteriorated. In the years that followed, Benchley worked as a freelance reporter and in 1919 he became editor- in- chief at Vanity Fair .

Benchley worked with Dorothy Parker for the Vanity Fair . In the spring of 1919, Benchley was one of the founding members of the later famous literary circle at the Algonquin Hotel , called the Algonquin Round Table , a loose group of journalists, writers and actors. Dorothy Parker, Robert E. Sherwood , Heywood Broun , Marc Connelly , Alice Duer Miller , Harpo Marx , Jascha Heifetz , Jane Grant , Ruth Hale , George S. Kaufman , Harold Ross , Neysa belong to the core of the artists who returned there McMein , Alexander Woollcott , Franklin Pierce Adams , Edna Ferber , Irving Berlin and Bernard Baruch . When Parker was fired for the tone of her posts in 1920, Benchley showed her solidarity and resigned as well. He showed understanding of her weaknesses and was connected to her through a platonic relationship .

In the 1920s and 1930s, Benchley continued to work as a journalist and theater critic, including for The New Yorker , Life and Vanity Fair , and as a presenter of his own radio show, Melody and Madness . In 1935, together with the critics Brooks Atkinson and Walter Winchell, he founded the New York Drama Critics' Circle (NYDCC), whose prizes are awarded every year to outstanding personalities from the theater world in the New York Algonquin Hotel.

From the late 1920s, Benchley also worked as a screenwriter and freelance actor for various film studios. Between 1928 and 1945 he was the author and leading actor of a number of short films (one-act play of approx. 10 minutes) in which he gave nonsense lectures about God and the world. The earliest of these were among the first continuous sound short films ever, the best known being The Sex Life of the Polyp (1928) and the Oscar winner How to Sleep (1935). Benchley was also seen in supporting comedic roles in films such as The Foreign Correspondent (1940), The Major and the Girl (1942) and My Wife, the Witch (1942) and was the narrator of the posthumously published The Road to Utopia (1946).

In early 1943, doctors diagnosed him with cirrhosis of the liver , a result of years of alcohol consumption. Benchley died on November 21, 1945 in a New York hospital. His funeral took place with his family on the island of Nantucket, south of Cape Cod . His grandson, Peter Benchley , son of the writer Nathaniel Benchley , was like this author and wrote the worldwide bestseller " Jaws ".