After studying at the Max Reinhardt Seminar in Vienna , Robert Hochner initially worked as an assistant director at the theater in der Josefstadt . From 1974 Robert Hochner worked as a freelancer for ORF , from 1979 until shortly before his death as the presenter of Die Zeit in Bild 2 . His career in television was only interrupted in 1989 and 1990, when Hochner was editor-in-chief of the Arbeiter-Zeitung , the former central organ of the SPÖ , which was then just sold . Due to illness, Robert Hochner was only seen irregularly on television in the last two years of his life. In 2000 he married the ORF presenter Clarissa Stadler . He died of colon cancer on June 12, 2001 . His grave is in the Hietzinger Friedhof in Vienna, group 17, number 18A. 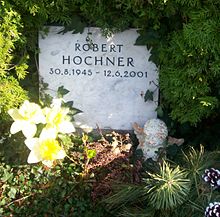 Robert Hochner has had a lasting impact on news journalism in Austria for decades. He was considered a technically experienced and committed editor.

The Robert Hochner Prize has been awarded to Austrian journalists every year since 2005 . Hochner himself was awarded a "Golden Romy" three times (1992, 1995, 2000) . In 2009 the Robert-Hochner-Park was opened in his honor in the St. Marx district in Vienna's 3rd district, Landstrasse .