In a 1977 paper, Graham gave an upper bound for solving a problem in Ramsey theory , known as Graham's number . This was considered to be the largest number used in a mathematical proof to date and was also included in the Guinness Book of Records . 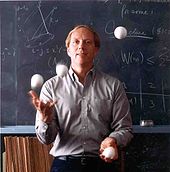 Ronald Graham as a juggler

Graham published more than 300 essays and five books. In particular, he wrote the book Concrete Mathematics with Donald E. Knuth and Oren Patashnik .

With Jeffrey Lagarias and others he investigated the number theory of Apollonian circular packings in the 2000s .

In 2003 he received the Leroy P. Steele Prize of the American Mathematical Society , of which he was a fellow; In 1993/94 he was its president. In 1983 he was invited speaker at the International Congress of Mathematicians in Warsaw (Recent developments in Ramsey theory). In 1985 he was elected to the National Academy of Sciences and in 1986 to the American Academy of Arts and Sciences . In 1993 he and Claude Berge were the first to receive the Euler Medal . Graham was also President of the International Jugglers' Association and teacher of juggler Steve Mills , inventor of the Mills Mess juggling trick .

Graham was friends with Paul Erdős and supported the idea of ​​assigning Erdős numbers . His own Erdős number was 1.

Graham was married to the mathematician Fan Chung . He died in California in July 2020 at the age of 84.