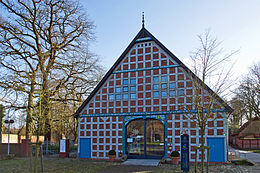 Rundlingsmuseum, entrance through the main building

It was built on a former farm that the Lüchow-Dannenberg district bought in 1972. Before that, the idea of ​​a new museum round village had been rejected. The idea of ​​a round museum was therefore combined with the conversion of historical buildings and social-cultural ideas in one of the best-preserved rounds .

In 1976 the so-called Heimathaus was opened and in 1978 a converted bakery , a flax kiln and a newly built wagon depot based on a historical model were added. In 1980 the district council refused to expand it into a larger museum. The number of visitors increased to almost 50,000 by 1987. For this reason, the museum was consistently expanded in the following ten years by expanding the area and relocating buildings: 1987 Parum-Schultze-Haus and museum café, 1988 blacksmith shop, 1991 drive-through barn and 1996 wheelwright shop . After the opening of the border in 1989, significantly fewer visitors came to the museum because there was no funding for group travel to the inner-German border . In 2005, the district handed over responsibility to the regional tourism administration, which had set up its central tourism information office in the main building the year before. In cooperation with the Rundlingsverein, a program of action days, exhibitions and museum education was expanded, which allowed the number of visitors to rise again. In 2013, a fruit barn with orchards was opened by Lower Saxony's Environment Minister Stefan Wenzel . In the cartwright, the blacksmith's shop, the bakery, the loom, the gopel factory , the bee fence ( beekeeping ) and the pottery , old craft techniques are regularly demonstrated.

Themes of the permanent exhibition