The Fb 2/5 11001 was a test locomotive of the Swiss Federal Railways (SBB). It was converted from a rod locomotive for the French MIDI railway company and was only used for a short time on lighter trains. It was mainly used to test the new single-axis drives in daily use.

During the First World War , the SBB decided to introduce electrical operation on the main lines as quickly as possible in order to become independent of coal deliveries from the warring neighboring countries. Since the technology of electric railway operation was still new, four test locomotives were ordered from the industry. The SBB wanted to start tests on the Bern - Thun line, which had been prepared for electrical operation, before the ordered locomotives were delivered . Therefore, BBC offered to convert the E 3301 rod locomotive, originally built for the French MIDI railway company, to meet the needs of the SBB: the rods were removed, the repulsion motors replaced with single-phase motors and two single-axle drives installed. The third drive axle of the original rod locomotive remained without a drive, which gave the locomotive an idiosyncratic appearance. 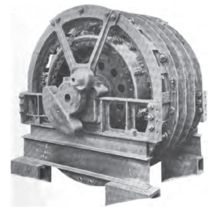 In 1910, the French Compagnie des chemins de fer du Midi decided to electrify the Perpignan - Villefranche railway with single-phase alternating voltage of 12  kV and 16⅔  Hz . The second part of the 46 km long route has the character of a mountain railway with gradients of up to 21.4 ‰. Six single-phase locomotives were ordered from various companies at home and abroad with the aim of being able to choose the most suitable design.

The following services had to be provided with the prescribed wheel arrangement of 1'C1 ':

The two companies Schweizerische Lokomotiv- und Maschinenfabrik (SLM) and Brown, Boveri & Cie (BBC) built the E 3301 locomotive in 1910/1911. It was driven by two large 10-pole, parallel-connected, low- speed repulsion motors of the Déri type , which almost filled out the whole locomotive box. The power and direction of rotation of these motors is controlled by turning the moving brush bridges on the collectors, which allows smooth start-ups. They were supplied with a voltage of 1,250 V by two transformers also connected in parallel. Approach, acceleration and change of direction were only accomplished via the movable brush bridges. The torque of the two motors was transmitted to the middle drive axle by two inclined drive rods without a back gear . From there, the outer axles were driven via coupling rods .

For the test runs on the Spiez - Frutigen railway line of the Lötschbergbahn, the transformers were equipped with additional windings for operation with 15,000 V. During these test drives, the locomotive turned out to be a faulty design. The commutation of the traction motors was extremely bad. When starting up, the phase shift was so great that the reactive current it caused often triggered the protection of the Spiez power plant , so that it switched itself off.

On February 18, 1912, the locomotive was nevertheless transferred to Perpignan. It was tested there until August 16, 1912. The locomotive could not meet the required performance and was returned to the manufacturer, as happened with two other machines from other manufacturers. Two other locomotives were able to partially meet the specification and one was able to meet it completely.

After the rejection of the E 3301 locomotive, the Swiss locomotive industry only built locomotives with low-speed, high-level repulsion motors for the Rhaetian Railway .

Conversion to a test vehicle

The single-axle drive had been investigated by the designers for a long time. In the form of the pawl bearing drive , it was already available for low powers and speeds and was mainly used on trams. However, the type of drive was not suitable for greater powers, because with this type of construction part of the weight of the drive motor is borne directly by the axle without suspension. In the case of larger traction motors, this causes uneven running, especially at higher speeds. Otto Tschanz , the SBB's top machine engineer at the time, therefore suggested converting the MIDI 3301 into a test vehicle.

The conversion carried out by the BBC was profound - only the frame, the box, the two running axles and the drive wheel set I were taken over from the old locomotive. The two transformers were replaced by a single wood-paneled transformer behind the driver's cab I, which was equipped with a flat switch for power control. The repulsion engines were removed and the drive rods and coupling rods removed. The first drive axle became the running axle, which received balancing weights mounted on the crank pin to balance the counterweight of the rod drive .

The locomotive was designed as a frame locomotive with a leading and trailing Bissel axle . Since the drive axle I became a running axle, the unique axle sequence 1'1Bo1 ' resulted .

Drive axles II and III were used to drive the locomotive. The drive axis II received the Buchli drive from BBC. In contrast to the Ae 3/6 I and Ae 4/7 locomotives, this was arranged on both sides, as the performance was not yet trusted. The third drive axle received the Tschanz drive designed by Otto Tschanz, which transmitted the torque via a double gear drive and a cardan shaft guided through the hollow axle. To increase the friction weight and to balance the mass, pieces of rail were placed in the machine room.

The locomotive had a box that was strongly indented at the ends and had no front end. Also striking was the large glare protection that spanned both cab windows.

The electrical equipment corresponded to the state of the art at the time. Existing components, some from competing companies, were also used. The locomotive had two pantographs , a lightning protection coil , a main switch with zero voltage and primary protection relays and a transformer with a step switch . A low-voltage oil switch with maximum current release and a pneumatically driven reversing switch were available for each motor . The traction motors came as used machines from BBC and MFO and were connected in parallel. The auxiliaries included fans for the transformer and motors, the compressor and a converter group for lighting, control power and battery charging. The cab heater and train heater were not installed at the beginning.

Since the SBB did not have a 15 kV electrified line available at the time the test began, the test runs were carried out on the Lötschbergbahn . On August 1, 1918, the BLS locomotive was officially handed over with a protocol as 2B1 10001.

The inventory of tools carried on the locomotive was extensive. It contained the following items, among others:

At the time of handover, SBB declined to accept any responsibility for operational disruptions that could arise from the transformer's wooden cladding, in particular for damage in the event of a fire outbreak or for damage to equipment in the vicinity of the rail waste carried as ballast. Leaky gear boxes and air lines, insufficient commutation of the MFO traction motor and the tendency of the rotor and running axle bearings to warm up were also found.

The trial operation at BLS could be carried out without major problems. The locomotive with the two new drives proved its worth. A driver's cab heater, an electrode steam boiler and steam heating couplings on both sides for heating passenger cars were retrofitted. On May 1, 1919, the locomotive was taken over by the SBB as Fb 2/5 10001. From July 1919 onwards, it mainly ran passenger trains between Bern and Thun, in some cases as far as Spiez, and covered 24,500 km by the end of the year.

Since the testing of the single-axle drives was finished and the new machines were continually being delivered on the Bern – Thun line, they were no longer in use, so new tasks were sought for the single item, which is why the locomotive was assigned to the Erstfeld depot on June 1, 1922 . Your task was to guide passenger trains Erstfeld - Arth-Goldau and Erstfeld - Lucerne . The daily mileage averaged 244 km. In 1923/24 it even ran a pair of passenger trains between Lucerne and Bellinzona . In 1924 there was apparently an undetected major damage. In any case, the annual performance was only about 2,000 km.
In 1925 Victor was assigned to the Lucerne depot and deployed from the Zug depot . Here, too, the single piece was used between Rotkreuz , Zurich and Arth-Goldau , covering a considerable 202 km in daily use as planned. The boiler for train heating has now been replaced by an electric train heater with 1,000 V. From October 1, 1926, the locomotive only ran one morning freight train pair Lucerne – Zug – Lucerne and otherwise served as a reserve. From May 1927, however, the performance increased again to 135 km per day through the management of passenger and freight trains in the Rotkreuz – Arth-Goldau – Zug triangle. About a year later, on May 15, 1928, Fb 3/5 11201 took over these services. Victor came to the Zurich depot and worked there in the shunting service. The annual output was only about 7,000 km, compared to 29,000 km in 1927. In 1929 the annual output was 592 km.

Conversion to a self-propelled welding car

In 1929 the Be 2/5 was decommissioned as a locomotive and converted into the self-propelled welding car Xe 1/5 99999, later the XTe 1/5 99999. The Buchli drive on drive axis II was expanded. According to some sources, the locomotive was converted into a welding car after a transformer explosion, but this has not been proven and also seems illogical because the locomotive still needed a transformer in order to drive itself.

Commons : SBB Be 2/5  - Collection of images, videos and audio files