S Club 7 was founded in 1998 and Simon Fuller , who previously made the Spice Girls successful, became their manager.

Barely a year after the group was founded, the first season of the television series S Club 7 was broadcast in Miami from spring 1999 and the debut album S Club was released in October . This brought out Bring It All Back , S Club Party and Two in a Million / You're My Number One as singles, all of which made it into the top 10 in Great Britain. Bring It All Back even reached number 1 and also made it to number 6 in the German charts.

In mid-2000, album 7 followed and the second season under the title S Club 7 in LA. Two more UK top 10 hits were released from this record, Reach and Natural .

In early 2001, S Club 7 was actually able to look forward to a 10th place in the US charts with the title Never Had a Dream Come True , which became their second number 1 hit in the British charts. However, it would remain their only success in the US.

In the spring of 2001, S Club 7 went on tour for the first time and the third season, this time as Hollywood 7 , was broadcast on TV. In May 2001, with Don't Stop Movin ' , they secured number 1 in the British charts for the third time and also recorded their second top 10 hit in Germany. Without mentioning it on the inside of the cover, the song contained samples of the hit song Billie Jean by Michael Jackson , which you could see on the bassline.

Also Have You Ever reached the end of 2001 to the top position in the UK. The corresponding album Sunshine followed about a month before Christmas, which also climbed the top of the UK LP charts.

In March 2002 Paul Cattermole announced that he was leaving S Club 7 to play in the rock band Skua. On June 3, 2002, the seven of them gave their last concert in London, at the Party at the Palace on the occasion of the golden jubilee of Elizabeth II.

In November 2002, their next album, Seeing Double, was released under the name S Club . However, it missed the top 10 and only landed at number 17. The single Alive that was released from it reached number 5 in Great Britain, but it was the group's worst position in the British charts until then.

The fourth season under the motto Viva S Club followed and in 2003 the first movie Seeing Double was released . From the beginning of 2003 S Club went on tour for the third time.

At the end of April 2003, the members announced their official separation.

At the end of May the last single was released as a double A-side Say Goodbye / Love Ain't Gonna Wait for You , with which the group again took second place in the UK charts. A week later, the hit compilation Best - The Greatest Hits of S Club 7 was released . 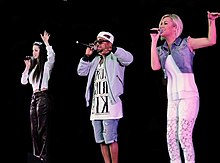 After Tina Barrett announced on Twitter in November 2011 that a reunion of the band would be possible, there were first confirmatory reports about a tour and an album in March 2012.

On November 14, 2014, S Club 7 appeared for the first time with their original cast on the British charity program Children in Need , where they played a medley of four of their greatest hits ( S Club Party , Reach , Bring It All Back and Don't Stop Movin ' ). performed. The Bring-It-All-Back tour was then announced at a press conference on November 17, 2014 for May 2015 . In March 2015, during an interview with Graham Norton on BBC Radio 2, the group announced that they would re-release their 2003 Greatest Hits album in May 2015, which will also include the previously unreleased song Rain .

After the end of the joint tour, Jo O'Meara, Bradley McIntosh and Tina Barrett released the single family as S Club 3 on December 11, 2017 .

Rachel Stevens is working on her solo career and released two albums ( Funky Dory 2003 and Come and Get It 2005) within three years . In November 2004, she recorded Do They Know It's Christmas? with Band Aid 20 on.

Jo O'Meara released her first album Relentless in the fall of 2005 . After finishing her career in mid-2006, she took part in the UK edition of Celebrity Big Brother in January 2007 .

Jon Lee, who had previously appeared in musicals, for example in The Famous Five - Smuggler's Gold - The Musical (1997), was again involved in various musicals such as Les Misérables , Love Shack and Notes from New York after S Club 7 .

Hannah Spearritt landed actress roles in Chucky's Baby and Agent Cody Banks 2: Destination London with Frankie Muniz . She also played one of the leading roles in the TV series Primeval , which was shown in Germany from June 2007 to July 2011 on ProSieben .

Tina Barrett initially withdrew from the public, but began a solo career as a musician in 2010.