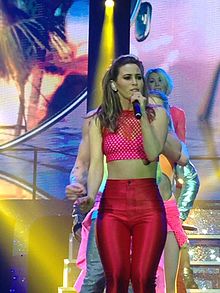 Rachel Stevens during the Bring It All Back tour (2015)

Rachel Lauren Stevens (* 9. April 1978 in London ) is a British singer-songwriter , dancer , actress and since its youth photo Model . She was a member of the British pop music - band S Club 7 known. After their dissolution, she started her solo career. To date, she has released seven solo singles and two solo albums, one of which, of the 2005 Come and Get It , 2007 by the magazine The Guardian in the list of 1000 Albums You Must Hear Before You Die (German: have heard in 1000 albums you must before you die) was recorded. In 2008 she reached second place in Strictly Come Dancing , the English equivalent of Let's Dance .

Stevens was born in Southgate, London, as the youngest daughter of Michael and Linda Stevens. She has Filipino and British Jewish ancestry. She has two older brothers and two step-siblings.

Stevens wanted to be on stage from a very early age: at the age of five, she took acting lessons and went to ballet .

At the age of 15, Stevens won a photo series in the youth magazine "Just 17". After further modeling jobs and graduating from Ashmole School in London, she enrolled at the London College of Fashion , where she also received her diploma. At the same time she was working in a film company and later engaged in public relations . However, she lost interest and decided to pursue a career as a musician and actress.

They became known for their pop hits, all of which reached high positions in the British charts , and their own television series of the same name. The sitcom, which first aired in the UK in 1999, was about the seven band members playing themselves and trying to become famous in the US . In each episode, the group sang a song from their current album.

S Club 7 had success with Bring It All Back , S Club Party and Reach . In 1999 they won the Brit Award in the Best British Newcomer category . Their hit Don't Stop Movin ' went to number 1 on the single charts in England twice and in 2001 earned the group another Brit Award in the Best Song category and the title Record of the Year .

The series was a commercial success, broadcasting in over 100 countries around the world and reaching around 90 million viewers.

In early 2002 Cattermole left the band. From then on, the remaining six members simply called themselves S Club. But already after a tour they announced their separation in spring 2003.

On November 14, 2014, S Club 7 appeared for the first time with the original cast on the British charity program Children in Need , where they played a medley of four of their greatest hits ( S Club Party , Reach , Bring It All Back and Don't Stop Movin ' ). performed. The Bring-It-All-Back tour was then announced at a press conference on November 17, 2014 for May 2015 .

After S Club 7, Stevens began a solo career. She released two albums ( Funky Dory and Come and Get It ) within three years . In November 2004 she recorded the benefit song Do They Know It's Christmas? With Band Aid 20 . on. Her biggest chart successes were Sweet Dreams My LA Ex , which also hit the charts in Germany and Switzerland , as well as I Said Never Again (But Here We Are) , Some Girls and More More More .

Stevens continued to have roles in film productions, including the English television film Suzie Gold (2004) and Deuce Bigalow: European Gigolo (2005) alongside Rob Schneider and Til Schweiger .

In addition to his music and acting career, Stevens also works as a model; for the British underwear manufacturer Pretty Polly and, since 2009, for hair products from Gliss.

Stevens is also committed to charity. She was an activist for the Everyman Testicular Cancer Awareness campaign alongside Robbie Williams . She was also part of the Make Poverty History campaign, alongside stars like Brad Pitt , David Beckham and Robbie Williams , to raise awareness of global poverty.

Stevens has been voted number two on the Sexiest Woman in the World list twice by UK FHM readers . It has been represented there every year since 2000.

Stevens made an entry in the 2006 edition of the Guinness Book of Records in the category Most Public Appearances by a Pop Star in 24 Hours . She appeared at seven public events.

On August 2, 2009, Stevens married British hotel worker and casual actor Alex Bourne, to whom she had been engaged since June 2008. The two have known each other since 1992 when they went to school together. The two have had a daughter since November 2010. In September 2013, Stevens announced that she was pregnant with their second child. On April 1, 2014, she became the mother of a second daughter named Minnie Blossom.