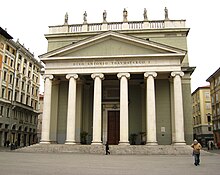 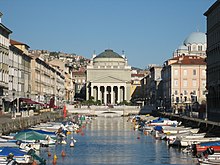 View of the Grand Canal 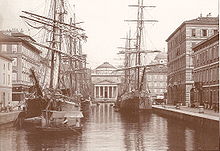 Dome of Sant'Antonio Taumaturgo, from above

Altar of the church

Sant'Antonio Taumaturgo or Sant'Antonio Nuovo is a Catholic church in the northern Italian city of Trieste . Built between 1823 and 1849 in neoclassical style according to the design of the Ticino architect Pietro Nobile , it was consecrated in 1842 and is today the largest Catholic church in Trieste. and 19th centuries such as The Visitation of the Virgin (1769) by Alessandro Longhi and The Crucifix by Joseph Ernst Tunner (1838).

The church is located in Piazza Sant'Antonio Nuovo at the end of the Grand Canal in the Borgo Teresiano district .

Between 1768 and 1771 a sanctuary was built at the end of the Grand Canal on the site of the current church of Sant'Antonio Taumaturgo, which was dedicated to Saint Anthony of Padua . Just six years after its inauguration, the church was elevated to a parish church .

Since the small baroque church did not appear appropriate for the new, up-and-coming tradesmen's quarter of Borgo Teresiano and, moreover, did not offer sufficient space for the growing community, it was demolished a short time later to make room for a more representative building. The first tender for the design of a new church building took place in 1808, but remained unsuccessful due to the occupation of Trieste by the French from 1809 to 1813. Of the nine submissions to the second competition in 1823, the proposal by Ticino architect Pietro Nobile won , who asserted himself against Matteo Pertsch , among others . The choice probably fell on Nobile, as he submitted a design for an eye-catching construction despite the lack of space. The foundation stone was laid on October 4, 1828. Although the building was not completed until 1849, the first service was held in April 1842.

In order to be able to expand the road network in the city center, the last section of the Grand Canal, which originally reached the entrance hall of the church, was filled in in 1934. The Piazza Sant'Antonio Nuovo was built on the area obtained in this way .

The church, designed in neoclassical style , has a porch made up of six Ionic columns that support a triangular pediment. Above it is a balustrade with six Martyrs from Trieste, the work of Francesco Bosa : San Sergio , San Servolo, Sant'Apollinare, San Giusto , Santa Eufemia and Santa Tecla . The statues are surmounted by a dome. Two bell towers are integrated in the facade at the rear of the building. The linear simplicity of the facade combined with classical motifs are reminiscent of a Roman temple.

The interior of the single-nave church is sparingly decorated. The slender Ionic double columns support a coffered vault. The iconographic program inside was determined by the architect Pietro Nobile and the Trieste patrician Domenico Rossetti and executed by local and German artists. Six large blackboards were created:

In the apse there is a fresco showing Christ entering Jerusalem by Sebastiano Santi (1836). The main altar was designed by Pietro Nobile and made by Francesco Bosa in 1837.

In a side chapel hangs The Visitation of the Virgin (1769) by Alessandro Longhi , the son of Pietro Longhi , above the altar .