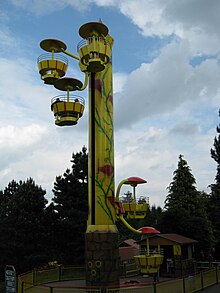 The Schwaben Park is an amusement park near Kaisersbach in Welzheimer forest in Rems-Murr-Kreis , Baden-Wuerttemberg ( Germany ).

The park was founded in 1972 by the Hudelmaier family under the name Safari Park as a zoo . In 1985 it was decided to rename the park Schwaben Park . The original plan was to take visitors through the lions and tigers on the park railway , but this was not approved. The first ride in 1978 was a small ferris wheel .

The park is divided into three areas: action area , fun and adventure, and the world of animals .

Some animals are kept in the Schwabenpark. In 2017 there were 37 chimpanzees , a tiger, parrots , ducks and goldfish.

In 1983 a 180-degree cinema was added to the park as a new attraction, which was the only one of its kind in operation in Germany. At the beginning of the 2014 season it was dismantled and replaced by a circular ride. The first rides after the ferris wheel were added in 1985.

From 1989, the Himalaya Bahn, a Schwarzkopf Wildcat 54m roller coaster, was in the park, but in 2016 it had to give way to the new ride - the fairy tale ride . The wild water run , built in 1998, represents one of the highest investments in the park's history and will be renovated and completely redesigned in 2018. There is also a small wild water course ( Krokosplash ) for children . The newer attractions include the Santa Lore swing ship, which is equipped with onride sound, and an interactive car ride ( 1950 ). In the summer of 2018, another roller coaster was opened with the Wild Hilde .

The family roller coaster Force One of the type "Elevated Seating Coaster" from Zierer , which has been in operation since May 18, 2010 , reaches a top speed of 65 km / h. The ride, which cost around 3 million euros, was subsidized with € 170,000 from the state of Baden-Württemberg.

According to the management, visitors to the park come from up to 100 km away, with families with children under 12 making up the majority. The offer is intended to appeal to all age groups, hence the park motto Schwaben Park - the park for the whole family . Mascot is a cartoon chimp named Schimpi, who wears a white t-shirt and red dungarees .

In 2020, work began on Hummel Brummel , a 500-meter-long roller coaster of the Wie-Flyer type designed for two-person gondolas with a speed of up to 30 km / h. The Hessian manufacturer Wiegand, who had previously built the bob kart track in the park, was commissioned with the construction. Hummel Brummel is the largest single investment since the park was founded.

The Schwaben Park is located in the Welzheimer Wald, which extends around Welzheim , directly south of Gmeinweiler, a small southern part of the municipality of Kaisersbach.

The Schwabenpark chimpanzee show, which has been running since 1976, was permanently suspended in 2017. The chimpanzees live in an area of ​​approx. 1300 m² in the park. The majority of these chimpanzees come from former private or circus husbandry and found a new home in Schwaben Park. Chimpanzee breeding is not practiced, however, as the park has been reducing the number of animals for a long time, following controversial discussions and criticism (from Peta and Animal Equality, among others ) of the show and the keeping of animals in the past. 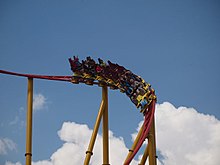 Force One in Schwaben Park

In 2017, the park created its own overnight accommodations in the form of log cabins.