A self-balancing vehicle is actively stabilized by a control loop . It has two wheels or only one wheel , wherein the driver is not the balance holds, but a gyroscope (gyro) measures the deviations from equilibrium and engines the center of gravity so that the vehicle tipping over.

When stationary and with the engine switched off, small support wheels are extended on some of these vehicles to prevent them from tipping over.

From 1903 the Irish-Australian engineer Louis Brennan developed a gyro-stabilized monorail that ran on steel wheels with double-wheel flanges on a single Vignole rail . On November 10, 1909, he successfully demonstrated this train in Gillingham and in 1910 at an exhibition in the White City in London in front of a large audience.

There was also an attempt to introduce this railway in Germany , for which the well-known Berlin publisher August Scherl and the district administrator of the Obertaunus district , Ritter von Marx , campaigned. However, the monorail project on the edge of the Taunus was canceled before a decision had been made, and there were no further projects.

Schilowski's self-balancing vehicle in 1914 in London

On November 27, 1913, the Russian Count Pyotr Petrowitsch Schilowski started his gyrocar for the first time. It was built in Birmingham , where he was able to win over AW Dring, chief engineer of the development department of the Wolseley automobile company , for his project.

The vehicle had two wheels arranged one behind the other at a distance of five meters and offered space for seven people. In the rear, two people could sit facing forward and three passengers facing backwards. Next to the driver in the chauffeur compartment was a passenger seat. It had a 1.016 m diameter and 11.4 cm thick top under the driver's seat which, powered by a 110 V electric motor, rotated at 2000… 3000 revolutions per minute. A counterweight was moved via a gearbox to prevent the vehicle from tipping over. The total weight of 2.75 tons was driven only by a Wolseley C5 engine with 16… 20 HP (90 mm bore and 125 mm stroke).

It was shown to an audience in London in 1914 and it did not actually tip over. Even if a person stood on the running boards while the vehicle was standing, the car did not sway significantly.

When the First World War broke out in the same year , Schilowski returned to Russia. The English buried the car in the ground. In 1938 the car was dug up again and was in the company's own Wolseley Museum until 1948, after which it was scrapped.

From 1921 to 1922 Schilowski was still developing a single-track railway, for which an eleven-kilometer test route between Saint Petersburg and Pushkin (city) was built. Technical problems and lack of money ended the project.

In 1929 Louis Brennan also presented a gyrocar . The vehicle had two wheels arranged one behind the other and side support wheels that were folded up while driving. Only the test vehicle was built.

In 1962, Louis Swinney introduced a gyrocar in Kansas City .

Jake Lyall built the RIOT wheel for himself , a single- wheel vehicle with a seat in front of the wheel. The motor, controls and counterweights are housed inside the wheel. Up to 45 km / h have already been achieved, with the RIOT 3 model , the previous speed record for single-wheel vehicles of 92 km / h is to be broken. 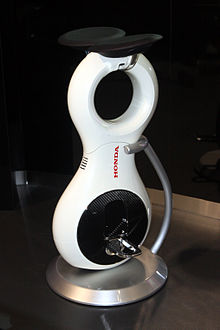 Segway Inc. (USA) has been producing a self-balancing electric scooter since December 2001. It has two wheels arranged side by side, a handlebar in the middle and is driven standing. With one battery charge you can drive up to 38 km and a maximum of 20 km / h.

The heavy gyroscopes of the early development can be replaced by lightweight electronic gyroscopes and tilt sensors . Today, particularly small vehicles are designed with electronic control and electric drive.

Commons : Vehicles by number of wheels  - Collection of images, videos and audio files