Seneca is a city in Oconee County in South Carolina , United States . At the time of the 2010 United States Census , the city had 8,102 residents. Seneca is the most important city of the Micropolitan Statistical Area (MSA) named after it with 74,253 inhabitants, to which the whole of Oconee County belongs and which belongs to the larger Greenville - Spartanburg - Anderson , South Carolina Combined Statistical Area (1,266,995 inhabitants).

The Democratic candidate for the office of Vice-President in 2004, former US Senator from North Carolina , John Edwards , was born in the city. This is named after Isunigu , the nearby Cherokee town , known to the English as "Seneca Town".

Seneca was founded as Seneca City and named after a nearby Indian village and the Seneca River . The city is at the intersection of the Blue Ridge Railroad and the newly built Atlanta and Charlotte Air Line Railroad. Both lines are now part of the Norfolk Southern Railway . AW Thompson and JJ Norton, who planned the route for the Air Line Railroad, acquired the land from Col. Brown of Anderson, South Carolina . A staff marking the town center was struck into the Townville Street level crossing. The land was divided into plots, each up to half a mile from the marker. These were auctioned on August 14, 1873. On August 14, 1874, the city received its founding act from the legislature of South Carolina. In 1908 the name was shortened to Seneca.

Old Cotton Warehouse. The right part of the warehouse burned down in April 2008 and was then demolished.

Seneca developed as a trading and trading center for cotton. During the harvest, the carts carrying cotton bales jammed several blocks along the railway line. A reception building, several hotels and a park were built on the tracks. In honor of its founders, the park has since been named Norton-Thompson Park.

The first school was built in 1874. The Seneca Institute - Seneca Junior College was a school for blacks and existed from 1899 to 1939.

With the construction of a weaving mill and factory settlement by the Courtenay Manufacturing Company in Newry on the Little River in 1893, the textile industry came to the area. WL Jordon built another textile factory and settlement east of Seneca; Because of the change of ownership, this was named Jordania, Londsdale and finally Utica over time . The JP Stevens Plant - later Westpoint Stevens Plant - was a textile factory that was built on Lake Hartwell . Other companies settled in the area. The textile industry shaped the economy in Seneca in the first half of the 20th century. Almost all of these textile companies have now been closed.

Seneca and the surrounding area changed significantly with the construction of Lake Hartwell in 1963, Lake Keowee in 1971, and Lake Jocassee in 1974. The Oconee Nuclear Station was built on Lake Keowee .

There are a number of historic buildings and districts in and around Seneca that have been listed on the National Register of Historic Places :

The Seneca Historic District was registered in the NRHP in 1974 and is located south of the railroad tracks. It includes a number of residential buildings and three churches that were built between the end of the 19th century and the beginning of the 20th century. The houses are built in the architectural styles popular at the time. The historic district also includes a mid-19th century log cabin brought from Long Creek.

The Ram Cat Alley Historic District was listed on the NHRP in 2000 and includes 21 commercial buildings that were constructed between the 1880s and 1930s. The street got its name from the cats that roamed around a meat market. Many of these buildings have been renovated and given new uses, including restaurants, shops and offices. 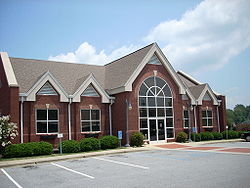