A target (neuter: The target , falsely because of the plural form Sölle also Söll written) is an in Pleistocene landscapes - especially in the northeast German plain ( Mecklenburg-Vorpommern , Brandenburg , East Holstein ), but probably also in the foothills of the Alps - occurring, circular usually or oval small bodies of water in mostly open landscapes. They are typical of ground moraines , but can also occur in other landscapes of the glacial series .

Sölle are located within mostly funnel-like hollow terrain forms. They belong to the still waters and usually have no superficial inflow and outflow. In the meantime, drying out, especially in the summer months, is typical for many stalls.

A Soll (kettle) on the B 193 between Penzlin and Peckatel 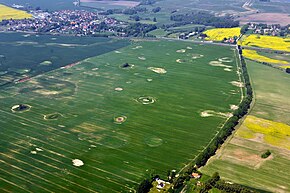 Sölle were created by the wetting of ice age dead ice holes. Parts of the inland ice that had become motionless remained, as they were covered by moraine or meltwater deposits, as dead ice after the retreat of the glaciers . Sometimes blocks of ice were pushed into the ground by the movements of the glacier and initially survived as dead ice enclosed in debris. During the thawing process, hollow shapes were created above ground. Such pools are mainly to be found in young moraine landscapes of the Vistula or Würme Ice Age; the older geest is already more geomorphologically leveled, weathered and therefore hardly contains any burrows.

Since the Jungle Pistocene landscapes, for example northeastern Germany, are intensively cultivated due to their fertile soils, soils are often endangered in their continued existence as biotopes and geotopes . Arable use usually takes place without a protective strip to buffer the hollow shape. The abundant supply of nutrients in intensive agriculture changes the composition of the flora within the target. Nutrient-loving, biomass-rich species of reed beds and tall herbaceous vegetation ( cattails , nettles, etc.) spread to the detriment of less competitive plants . Often strong are Verlandungs - and Verschlammungserscheinungen due to eutrophication observed. Algal blooms lead to the consumption of oxygen and to " overturning " the water chemistry.

In the course of the melioration , in the past, soils were completely leveled and plowed. Because of the compacted subsoil, however, such areas continue to be prone to waterlogging and do not allow regulated agriculture.

In state nature conservation laws (e.g. Brandenburg ), soils belong to the biotope types protected per se (Section 32 (1) No. 1 BbgNatSchG) in the group of small bodies of water if they are not larger than one hectare including the vegetation on the banks and constantly carry water.

Typical plants of the small bodies of water are reeds , small duckweed , common water crowfoot , poison buttercup , floating pondweed , yellow pond rose , white water lily , knotweed , narrow-leaved and broad-leaved cattail . Characteristic animal species, especially the somewhat larger burrows, are among the birds the little grebe , red-necked grebe , marsh harrier , water rail and pond rail , in reptiles the grass snake , amphibians also occur regularly, e.g. B. the pond frog . For many types of amphibians smaller kettle holes are and those with more fluctuating water levels of major importance (u. A. For the common frog , the moor frog , the spadefoot , the tree frog , the fire-bellied toad and crested newt ). An important reason for this is that natural enemies of the tadpoles are less common here, especially fish , and therefore the reproductive success is generally greater.