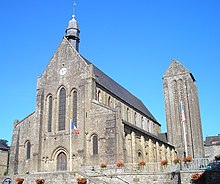 St. Évroult is a Gothic church in Mortain in the Normandy region of France . It has been classified as a Monument historique since 1840 .

The predecessor of today's church, consecrated to Saint Évroult d'Ouche († 706), was founded in 1082 on the same site by Robert de Conteville , a half-brother of William the Conqueror . Only one portal has survived from this church.

The present church was built between 1220 and 1250 from brown granite quarried nearby. The donors included u. a. Countess Mathilde von Boulogne , daughter-in-law of the then French King Philippe-Auguste .

The collegiate church has been affected several times by armed events. In 1562 parts of it were set on fire by Huguenots . Further damage occurred during the French Revolution . In August 1944, during the fighting within the Liège company , it was hit by numerous bombs and grenades, the damage caused by explosions has been repaired by extensive restorations in recent years.

In the sober-looking west facade, only a single portal, flanked by two pointed arcades , opens access to the interior of the church. To the right and left of it, two windows emphasize the basilica structure of the church. Above the portal, three tall, slender windows lead into the gable, which is crowned by a bell tower that was added in 1809. Inside is a bell from the time of Henry IV .

St. Évroult is best known for the Romanesque portal on the south side, which originated from the previous building and has typical features of Norman architecture , such as B. the ornaments made of zigzag ribbons or saw teeth.

Also on the south side of the church, the bell tower rises above the right arm of the transept , which is reminiscent of a campanile due to its position . This tower, one of the tallest in Normandy, consists of a single shaft with no real spire. Its two elongated, partially blind window openings with frameworks start a few meters above the floor and reach up to the gable. The tower houses the sacristy on the ground floor and a small museum on the floor above.

The nine-meter-wide main nave is characterized by the massive round pillars. In the area above the arcades you can see figures of saints standing in niches. The wooden barrel vault dates from the 16th century; it was only exposed again during the restorations in 1993 and until then it was covered by a vault made of plaster, which reduced the height of the interior by 5 meters.

Among the notable features pieces include a holy water font from 1614 and the organ, the high altar of marble and the crucifix from the 18th century. The misericordies of the wooden choir stalls from the 15th century show popular, partly satirical representations.

The original glass windows were destroyed in the war - the current ones show various saints, including in the south aisle and the like. a. the holy Evroult.

On the altar in the north aisle there is a copy of the " Patrona Bavariae ", the original of which can be seen on the Marian column in Munich . The statue was given as a gift in 1982 by the Bavarian partner community of Thannhausen on the occasion of the church's 900th anniversary .