The passenger steamship Steuben , named after Friedrich Wilhelm von Steuben - ex Munich and General von Steuben  - was managed by North German Lloyd . Its sinking at the end of the Second World War is considered one of the great catastrophes in shipping history.

The later Steuben was launched in 1922 under the name of Munich at AG Vulcan Stettin and was put into service on June 5, 1923 as the first passenger ship to be built by Norddeutscher Lloyd for the North Atlantic service after the First World War . She was already the third ship of the NDL under this name.

The Munich and her sister ship Stuttgart , which was commissioned in January 1924 , were used in transatlantic traffic with three passenger classes. In the winter of 1925/26 the passenger facility was first converted, which led to an increase in the number of better cabin spaces. The Munich served from 1925 occasionally for "recreational trips at sea" as it cruises called at the time. From July 17 to August 12, 1925, a polar voyage with the Munich was carried out.

It caught fire on February 11, 1930 in the port of New York (USA) while unloading general cargo and was largely destroyed inside. The ship was makeshift ready for sea and ran under its own power to Bremen on May 9th. There it was restored at the Deschimag -Werft AG "Weser" from July 1, 1930 to January 18, 1931, received new chimneys and again a modified passenger facility. The installation of an exhaust turbine increased the speed to 16.3  knots .

In 1931 the ship was put back into service and renamed General von Steuben as a sign of German-American friendship . With the new chimneys, their appearance was brought into line with that of the large express steamers Bremen and Europa as well as that of the Columbus . In the liner service she was rarely used, but became the cruise ship of the NDL.

The namesake Freiherr von Steuben was a successful Prussian officer and American general of the American War of Independence and became a hero of the Continental Army . He is also the namesake of the annual Steuben Parade in New York .

From 1935 the “white” General von Steuben was only used for cruises for 484 passengers, especially from the USA. She was the only remaining luxury cruise ship that did not mainly do KdF trips. In November 1938 it was renamed again, in Steuben .

At the beginning of the war, according to agreements with Estonia on October 15, 1939 and Latvia on October 30, 1939 , the Steuben was used for the forced resettlement of Baltic Germans from their homeland to the German Reich. 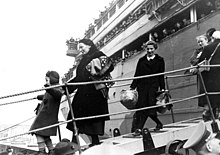 After that, the ship served as a barge for the Kriegsmarine in Kiel and Danzig until it was used as a troop transport and wounded transport ship on the Baltic Sea from July 1944 . It wasn't marked as a hospital ship . At the turn of the year 1944/45 it became a barge again. Die Steuben then undertook several trips to evacuate the wounded and refugees from the German eastern regions.

Sinking of the Steuben

On February 9, 1945 the Steuben ran from Pillau towards Kiel. On board were about 2,800 wounded, 300 medical personnel, 150 crew members and allegedly about 900 refugees. There is great uncertainty about the number of embarked refugees. The ship drove in the dark in the escort of the torpedo boat T 196 through the Baltic Sea towards the west.

On 10 February 1945, at 12:55 which was Steuben south of Stolpe Bank at the height of Stolpmünde two torpedoes of the Soviet submarine S-13 hit and sank within only 15 minutes. The submarine commander Alexander Marinesko , who had previously maneuvered the ship under water with the listening device for four hours , initially stated that he had sunk the light cruiser Emden .

When the Steuben sank , most of the people on board were killed, only about 660 castaways were rescued from the ice-cold Baltic Sea by the transporter's escort ship and the TF 10 torpedo catching boat that came to help . Between 1100 and 4200 people lost their lives in the sinking.

The wreck was established in May 2004 by the survey ship ORP Arctowski the Polish Navy found and identified. Photos and drawings of the sinking and finding were published in National Geographic Magazine in 2005.