New slipways from the Vulcan shipyard with steamer (1903) 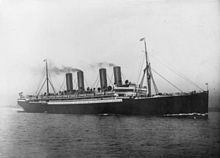 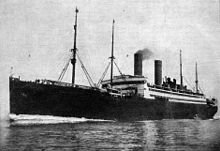 Invitation card for Gustav Bauer to take part in the test drive of the passenger ship Germany on June 2, 1900

Founded in 1857, the Stettiner Maschinenbau Actien-Gesellschaft Vulcan in Bredow near Stettin was a pioneer of modern iron shipbuilding and for many years was one of the leading shipyards in Germany in both civil and military shipbuilding, where the largest and fastest passenger ships in the world were built at the time. In addition, the shipyard built over 4,000 steam locomotives .

In 1905 the company founded Werft AG Vulcan Hamburg as a subsidiary . From about 1913 the spelling Vul k an was used. In contrast to the geological name volcano , the name of the shipyard is emphasized on the first syllable ([ ˈvʊlkan ]). It is derived from Vulcanus , the Roman god of fire and blacksmithing.

Both Vulkan locations were taken over by Deutsche Schiff- und Maschinenbau Aktiengesellschaft (Deschimag) based in Bremen in 1926 . This closed the Stettin operation in 1928 and sold the Hamburg shipyard to Howaldtswerke AG in Kiel in 1929 .

In 1851, the Hamburg engineers Fruchtchtenicht and Brock founded the shipyard and machine factory Fruchtchtenicht & Brock in the small town of Bredow near Stettin . The first ship was a 35-meter-long iron paddle steamer built under primitive conditions on the Oder beach, the first iron ship ever built in Prussia , with the name Dievenow for the Stettin shipowner JF Braeunlich , who used in shipping on the Stettiner Haff between Stettin and Swinemünde has been. A number of smaller ship units followed, during which the factory premises were continuously expanded and expanded.

In 1856 the company ran into financial difficulties. A group of investors, entrepreneurs and politicians from Szczecin and Berlin then joined the company and founded the Stettiner Maschinenbau Actien-Gesellschaft Vulcan in 1857 .

Soon afterwards, this company also ran into financial difficulties. The way out of the imbalance was to be achieved by building locomotives. The first locomotive was delivered in 1859. From then on, the additional locomotive construction department in Bredow near Stettin was used to distinguish it from shipyard operations .

The good running business allowed the expansion and expansion of the factory premises. In the period that followed, the site was divided into "Unterhof" and "Oberhof". The Unterhof on the Oder was responsible for shipbuilding, while the Oberhof produced the steam engines and locomotives.

Military activities began in 1867. The Prussian armored frigate was built in 1873 and about three years later, under the direction of the then director Rudolph Haack, the first steam-powered ironclad , the SMS Sachsen, was built in a German shipyard .

In 1880 the shipyard received its first floating dock , but in 1883 part of the shipyard facilities was destroyed by a major fire. This was reason enough to modernize the shipyard and expand it through the purchase of land. In addition to three existing helges , four more, larger ones were built. A major boost in the construction of civilian ships was the major order from Norddeutscher Lloyd (NDL) based on the Reichspostdampfergesetz . After the conclusion of the contract with the German Reich, NDL ordered three steamers from Vulcan for the main line of the ( Prussian class ) and three for the branch line of the ( Stettin class ).

Until then, the NDL had only ordered a few steamers for the trip to England from German shipyards. AG Vulcan, Stettin, became the main contractor of the NDL and delivered 24 ocean liners to the NDL by 1914, including all four four-chimney high-speed steamers . The first of these ships, Kaiser Wilhelm der Große , won the Blue Ribbon in 1897 , the first time that a German ship has won this trophy. In 1900 the Blue Ribbon went to the four-chimney high-speed steamer from Hapag, Germany , which was also built at the Vulcan. The largest prewar Lloyd ship was the George Washington with 25,570 GRT.

Bredow was incorporated into Stettin in 1900 and the Vulcan works were one of the largest private companies in Germany with over 7,000 employees at that time. At the beginning of the 20th century, ever larger docks were built on the grounds of the Unterhof. After all, ships with such great drafts were built in Stettin that they could only come down the shallow Oder to the Baltic Sea with great difficulty. They often had to be transferred to the open sea near Swinoujscie using floating pontoons that were attached to the sides of the ships . This procedure was complicated and risky, but in spite of the greatest precautionary measures, basic hits occasionally happened again and again. With the 24,581 GRT Empress Auguste Viktoria for HAPAG and the 25,570 GRT George Washington for North German Lloyd , the Szczecin shipyard's largest ships were built in 1906. With that the limit of the ship size in Stettin was reached.

In order to continue to be active in the construction of large ships, it was decided in 1905 to found a subsidiary in Hamburg. Work began in 1907 and in June 1909 Kaiser Wilhelm II personally inaugurated the AG Vulcan Hamburg at Rosshafen in Hamburg-Steinwerder . At the beginning there were two helges on which the first newbuildings began in 1910 with the passenger ship Imperator and the liner SMS Friedrich der Große . There were also two floating docks. The ships built in Hamburg were given their own hull number; However, an overall construction list was also kept in Stettin, so that Friedrich the Great , for example, had Hamburg number 2, but was given number 310 in the overall construction list.

In 1911 Hamburg became the company's headquarters, which also resulted in a change of company to Vulcan-Werke Hamburg and Stettin Actiengesellschaft .

The number of workers and employees rose sharply over time. In 1870 the Vulcan had a workforce of 1,800 employees, in 1909 there were already 8,000 and at the end of the First World War then around 20,000 together at both locations.

A total of 110 warships were built between 1871 and 1911, including a large number for the Chinese, Japanese, Russian and Greek navies. During the First World War, the Vulkan shipyards were largely busy with armaments contracts for the Imperial Navy ; the Hamburg shipyard invariably builds warships.

Between the wars and the time of National Socialism

After the First World War, both Vulkan sites could no longer build on the successes of the pre-war period because the construction of warships was prohibited by the Treaty of Versailles . From 1926 to 1928, Vulkan-Werke became part of Deutsche Schiff- und Maschinenbau AG (Deschimag). The locomotive construction division was completely separated and went to Borsig in Berlin in 1928 . The Szczecin Vulkan-Werk built a total of 4,002 locomotives.

The shipyard in Szczecin was completely closed in 1928. When the National Socialists came to power in 1933/34, the Stettin-Bredow concentration camp was briefly built on the shipyard site. Whose camp commandant, Joachim Hoffmann , was shot in the course of the so-called Röhm putsch . The Howaldtswerke Kiel as the new owner continued the shipbuilding on the Elbe from the end of 1929 with the Howaldtswerke Hamburg . The eastern part of the Hamburg shipyard area was cleared in 1930/31; The Hamburg engine plant was later built there . With the Szczecin and Hamburg volcanoes, two big names in German shipbuilding history disappeared. In 1939 an attempt was made to restart shipbuilding on the old volcanic site in Stettin-Bredow. Up to 1945 a total of 34 ships had been built there, mainly submarines, this was only partially completed.

After the National Socialists seized power in autumn 1933, at the instigation of Police President Fritz Karl Engel and under the direction of Joachim Hoffmann , the Bredow concentration camp was the first concentration camp in the Szczecin area on the demolition site of AG Vulcan . After Hoffmann's severe mistreatment of prisoners became public, the camp was closed on March 11, 1934 at the instigation of the Prussian State Ministry .

Szczecin came to Poland after the Second World War . The Szczecin shipyards were largely destroyed by bombing during World War II. As a state enterprise, the Szczecin Shipyard (Stocznia Szczecińska) was founded in 1948 on the former site of the Szczecin Oder Works and the Vulcan Shipyard . Investments were made in new systems and due to the many successfully completed orders, around 11,000 people were employed at the end of the 1990s. In 1999 the orders for the construction of new ships collapsed due to the international shipbuilding crisis. Financial problems and the ensuing insolvency led to the cessation of work in March 2002 and bankruptcy in July 2002. The company was taken over by the State Agency for Industrial Development and continued production under the name Stocznia Szczecińska Nowa . In 2009 this shipyard also ceased operations, ending a more than 150-year-old shipbuilding tradition in Szczecin.

Ships of the Vulcan shipyard in Stettin

The model was sunk during the First Sino-Japanese War in February 1895 in the sea battle of Weihaiwei, the replica was made in 2003/2004.