The Sydney Harbor Bridge at night

Which officially opened on March 19, 1932 Sydney Harbor Bridge (German Sydney Harbor Bridge ), the main route between Sydney's north and south over the Sydney Harbor ( Port Jackson ) represents and is simply by locals "coat hanger" (German hangers called) . The bridge was inscribed on the Australian National Heritage List as a national monument in 2007 on its 75th anniversary . In the justification of the Australian monument protection authority, the bridge symbolizes the development of modern Sydney and internationally for the bright future of Australia.

In addition to the famous Sydney Opera House , this building is usually mentioned as another symbol of Sydney.

The hinges of the bridge

The Sydney Harbor Bridge spans 503 meters and the apex rises 134 meters above sea ​​level , which height can increase 18 cm on hot days due to the expansion of the steel. 39,006 tons of steel are processed in the arch . A total of 52,800 tons of steel were used, making the bridge one of the heaviest and longest arched bridges in the world. In addition, around 17,000 m³ of granite and 95,000 m³ of concrete were used. 79% of the steel came from Redcar in the north-east of Great Britain , the rest from Australian production. The granite was from Moruya , New South Wales , and the cement for the concrete was also from Australia . With its width of 50 meters, it is the "widest bridge in the world with a long span" ( Guinness Book of Records , 2004) and has a total of eight lanes of road (including one bus lane), two train tracks, a bicycle path and a footpath. The bridge was opened with six road lanes, two train tracks, two tram tracks and one foot and one cycle path. On the bridge is the Bradfield Highway, which is one of the shortest highways in Australia with about 2.4 km (the shortest is on the Story Bridge in Brisbane and is also called the Bradfield Highway). With the ramps, the overall length of the structure is 1149 meters.

The two granite-clad pillars on each side are only decoration or serve as a museum (southeast pillar). They tower 89 meters above the water level. In reality, the arch bridge is supported by huge foundation blocks. The sheets were with Hilfsabspannungen in cantilever made. 128 steel cables were tied back for each half of the arch. Each was 365 meters long, 7 cm in diameter, weighed 8.6 tons, and consisted of 217 individual wires.

The clearance for ships is 52 m.

The chief engineer of the New South Wales Public Works Department, John Jacob Crew Bradfield (1867-1943), used the Hell Gate Bridge (New York), completed a few years earlier, as a model . As early as 1885 (possibly even earlier), discussions about crossing the port began. There was repeated debate about bridges or tunnels or the general need for a structure.

The bridge was built in eight years from 1924 to 1932 by Dorman Long according to the detailed drafts drawn up by Ralph Freeman , the partner of Sir Douglas & Francis Fox . The cost was £ 10,057,170, 7 shillings and 9 pennies (initial estimate: £ 4,217,722). On average, around 1400 men were employed in the construction of the bridge, 16 of whom had fatal accidents during the construction work.

The bridge was finally opened on March 19, 1932. When you were planning it, it was planned to be the arch bridge with the largest span in the world. Until its completion, however, it was surpassed by 25 ft (7.62 m) by the Bayonne Bridge in New York City , USA , which started later but opened a year earlier. However, the Bayonne Bridge is significantly narrower than the Sydney Harbor Bridge.

Painting the bridge is an endless undertaking as it typically takes ten years to use 30,000 liters of paint. Once a string troupe has completely painted the bridge, they have to start all over again. About 272,000 liters of paint were applied in the first three coats. A total of 485,000 m² of steel has to be painted. In contrast to the first painting with brushes, in recent years the paint has been applied with spray guns. The approximately 6 million rivets are also protected against corrosion with paint.

The inauguration ceremony on March 19, 1932 took place during the Great Depression ; It is estimated that between 300,000 and 1,000,000 people attended the celebration. The celebration in the form of the Venetian Carnival included u. a. carpets of flowers drifting past the bridge and ceremonial parades of marching groups and music bands; numerous passenger ships crossed under the bridge. At the ceremonial cutting of the opening ribbon by the Australian Prime Minister Jack Lang , 21 salute shots were fired, and the Royal Air Force flew over the bridge in relay. 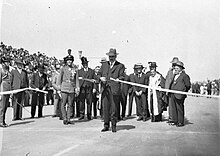 Inauguration of the bridge on March 19, 1932 by Prime Minister Jack Lang

Francis de Groot caused a protocol incident before the opening ceremony when he rode through the crowd on horseback in a hussar uniform from the First World War with a drawn cavalry saber and with the words "in the name of the decent and respectable people of New South Wales ”(German:“ in the name of the decent and venerable people of New South Wales ”) broke through the ribbon that was stretched for the official release of the bridge. Groot was a senior member of the paramilitary fascist organization New Guard , which announced that Jack Lang, the Australian Prime Minister of the Australian Labor Party , would not inaugurate the bridge, so state protection forces awaited a mass demonstration. The ribbon was then renewed, Jack Lang officially inaugurated the bridge and Groot became known in Australia through this act. He was later sentenced to a £ 5 fine .

Before the bridge was built, around 40,000 vehicles used the ferries every day. In 1992, 181,878 vehicles passed the bridge every day , after the construction of the Sydney Harbor Tunnel at the turn of the millennium, around 161,000 vehicles. The amount of the toll depends on the time of day.

The Sydney Harbor Bridge was added to the List of Historic Civil Engineering Landmarks by the American Society of Civil Engineers in 1988.

Since October 1st, 1998 it has been possible to climb the arch of the bridge for a fee. Many visitors are brought up in groups every day, the one millionth on April 14, 2003.

The bridge has been the center of the New Year's Eve celebrations in Sydney Harbor since 1993, which are always celebrated with gigantic fireworks. The bridge is also illuminated pyrotechnically. At the turn of the millennium , almost 2.5 billion people watched the live broadcast of the New Year's Eve fireworks. The performance was accompanied by the 25-minute composition The Ghost of Time by the Australian group Icehouse , which was recorded by the Sydney Symphonic Orchestra.

On October 25, 2009, a mass picnic was held on the deck for the first time . Around 6,000 people had breakfast on a lawn specially rolled out for this event, accompanied by background music from accordion players and trumpeters . Around 45,000 people applied for the tickets previously drawn. The event is to take place once a year in October as part of the food festival.