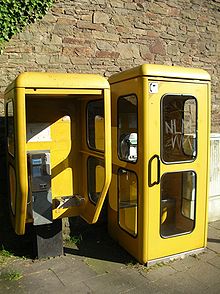 On the left a telephone hood TelHb82, also suitable for wheelchair users, on the right a telephone booth TelH78 from the times of the German Federal Post Office

Originally, the term telephone cell specifically referred to the cabins with a telephone installed in buildings . Initially, these were available in the post offices responsible for telecommunications and equipped with a (often soundproofed) door to protect the intimacy of the caller. Booths set up outdoors were referred to as telephone booths or telephone kiosks . Over time, the term changed and so only the term cell is used for indoor (i.e. in buildings) as well as free-standing open outdoor cabins .

A simplified form is the so-called telephone cover, which is open at the front and does not reach down to the floor at least on the sides. It is easier to use for wheelchair users, but offers less protection from the elements. Such hoods are therefore often found in interiors or covered outdoor areas, where they only serve to shield against drafts and noise.

Call columns are assigned to preset telephone numbers (e.g. fire brigade , police , taxi ) and are therefore not to be regarded as telephone booths.

A club phone is a semi-public pay phone.

With the advent of telephony, it was necessary to set up "public telephones" in the form of telephone booths in order to open up the limited number of lines for a larger group of people. The world's first public pay phone was on January 28, 1878 New Haven ( Connecticut situated, USA). At the turn of the century, the telephone kiosk appeared in Denmark .

With the expansion of the improved network of private connections and the growing number of cell phones since the 1990s, the importance of telephone booths has decreased. To make it easier to maintain the facilities, they are usually only set up with telephone or cash cards, rarely as coin-operated machines.

In Switzerland, the number of public telephone booths (Publifone) fell from 4900 in 2007 to 3200 in 2014. As of 2018, the requirement that Swisscom, as the provider of basic telephony services, must provide a booth in every political community ( public service ) was waived . The highest coverage density was in Switzerland in 1995 with more than 58,000 private and public telephone booths. The last Swisscom telephone booth was dismantled on November 28, 2019 in Baden AG , 150 will continue to be operated by APG .

Telephone booths have only existed in Austria since 1903, when public telephone machines were first installed in Vienna and other major cities of the Danube Monarchy. Here, too, the forerunners were wooden cells inside the post offices. Between 2003 and 2006, Telekom Austria converted more than 1000 telephone booths throughout Austria into so-called multimedia stations with broadband internet access .

As part of the street furniture , well-known architects such as Luigi Blau designed Viennese telephone booths. In 2004, the House of Science in Graz designed an exhibition in the discarded walls of Austrian telephone booths made of aluminum-plastic-aluminum composite panels, in which the three glass windows about 35 cm wide and 25 cm high with rounded corners for the presentation of slides, embedded with rubber seals -Slides were used.

There are some projects for using the old phone booths. They are either converted into a rentable office, a small disco or public bookcases . In September 2016, telephone booths will be converted into free mini-libraries in Salzburg.

Telephone booths are shown in crime films as a source of anonymous clues. In fact, the phone booth is still one of the few ways to make anonymous phone calls. With cell phone calls , both the approximate location and the identity of the caller are known (master data for the SIM card , IMEI number of the end device). The location of a phone booth is also known, but not the identity of the caller.