Tenthredo amoena is a species from the family of sawfly (Tenthredinidae). It belongs to the subgenus Zonuledo of Tenthredo , which is considered by some editors as a separate genus.

The species reaches a body length of 9 to 11 millimeters. Like all species of the subgenus Zonuledo , it is black in color with yellow markings , with short antennae that are about one and a half times the length of the head and are slightly culled at the end. The wings of all species are slightly yellowish in color.

The species can be distinguished from the related species in Central Europe by means of the drawing. In the female, the thighs of the middle and front legs are yellow with black markings. The first antenna segment, the scapus, is pure yellow. The wing scales ( tegula ) have a yellow border, rarely also completely yellow. The fifth tergite of the abdomen is colored yellow or completely yellow at the front edge. The tips of the rear rails are red-yellow, never black. The Mesepisternen (this is the lower lateral part of the central trunk section, above the hips of the middle legs) are dotted and shiny. In the male, the front (apical) sternites of the abdomen are blackened. The hind legs are pure black. The metepisterns are black, sometimes sometimes dirty yellow. The scapus of the antennae is yellow without blackening, the scutellum is often spotted yellow, rarely as in Tenthredo distinguenda pure black.

The species lives in almost all of Europe, north to Norway, south to the Mediterranean, west to Great Britain and France, east to Bashkiria in the eastern part of European Russia. Details of the species also from Asia Minor are uncertain and may be based on confusion. Contrary to previous assumptions, the species also colonizes the Iberian Peninsula .

In Germany the species is common and common.

Way of life and ecology 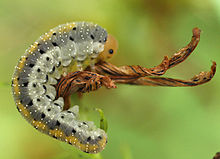